Rising senior Craige Saxton is a promising dual-threat quarterback out of Tattnall County High in Reidsville. The young signal-caller showed a lot of promise last fall, so we caught up with him to talk about his recruitment, this offseason and football in general.

“This year’s offseason has been great, and I have worked a lot on my game—mostly my mechanics and technique,” Saxton said.

The speedy 6’1″ 190-pound QB has remained a sleeper among college coaches during his high school career, but after showing out at a few showcases, colleges will be waking up before you know it.

Saxton talked about his busy offseason. “This spring was my first time doing showcases, and after a nervous performance at the MVP Camp in Valdosta, I have earned Top QB two out of three showcases.” 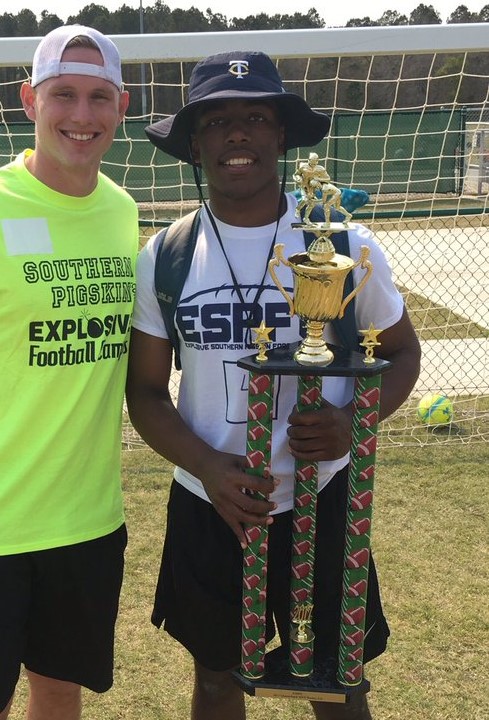 Saxton is a big-time competitor out there on the field. He was the driving force for his offense last year, rushing for 748 yards and eight touchdowns while throwing for 1,038 yards and four TDs through the air.

The rising senior models his game after former Ohio State quarterback Braxton Miller. He has lightning-quick feet and a natural feel for pressure when in the pocket. He does a great job of stretching the play out, giving his receivers more time to get open, and he keeps his eyes downfield surveying his options.

With so many colleges moving to the spread offense, having a QB who can make plays on his owns is a major advantage. Saxton believes he fits that role perfectly.

“My legs are a strength and I have an arm that’s decent,” he said. “Being able to pull it down and get five (yards) is a good advantage over your opponent. That is what makes being a dual-threat quarterback better.”

So far, Carson-Newman is the only college to contact Saxton, but we expect more to watch his film during the evaluation period and try to get him to camp during the summer, where he can show off his refined fundamentals. Saxton is a really coordinated athlete; he is a standout on the baseball diamond, a playmaker on the hardwood, and makes high-degree-of-difficulty throws at QB. Our staff loves how hard Saxton runs with the ball in his hands, and he seems like a perfect fit for an offense that is option-based.