It was almost exactly two years ago today that Recruit Georgia first discovered elite pass-rusher Justin Mascoll from South Gwinnett. Even watching his film as a freshman, it was obvious that the 2018 recruit had the makings to be a Power 5 football player. Well tonight, Mascoll, who is arguably the #1 pass-rusher in the entire country, made his college decision, and committed to the Clemson Tigers. 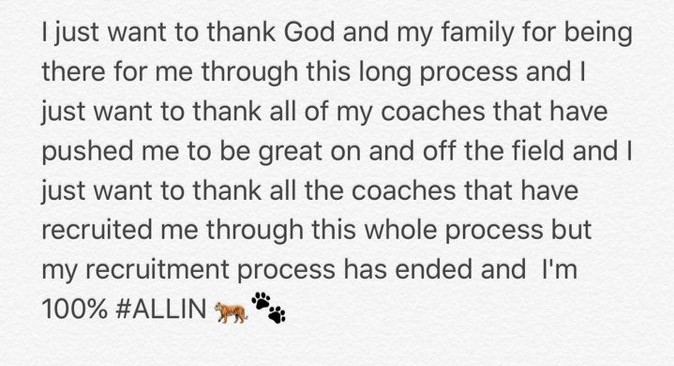 For some, especially members of a certain fanbase in his home state, this might be a shocker. For the last few years Mascoll had earned interest from every major Power 5 college in the country, and seemed to be enamored at the potential of playing at UGA like other Metro Atlanta stars like Lorenzo Carter. At the end of the day, Coach Venables’ long-term commitment to recruit the freakishly talented defensive lineman paid off, and after making another trip to the campus on March 4, Mascoll was ready to be a Tiger.

Mascoll is the #7 player in our North Georgia rankings and he joins QB prodigy Trevor Lawrence from Cartersville. The two early commits form a strong foundation for the Clemson 2018 recruiting class, and it looks like the Tigers will be making a strong push for other players in our Top 50.