Malik Robinson, a highly coveted class of 2017 linebacker prospect from South Gwinnett, committed to North Carolina this weekend. He announced on Twitter, “I would like to announce that I will be continuing my education and football career at the University of North Carolina.” – More from tweet HERE.

Sandy Creek’s Cole Neely was TOP Five in the Bigman Takeover. His Recruit Georgia profile should be made in the next 48 hours.

Ashon Hayes, a big defensive tackle from Taylor Co, visited Troy over the weekend. He was 2nd Team All Region last year. 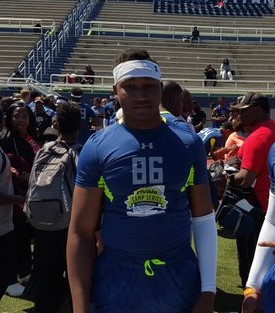 An impressive looking defensive end out of North Cobb is Thurman Geathers II. He is part of the Geathers family, who has put 6 athletes into the NFL. Geathers let Recruit Georgia know that he plans on visiting North Carolina this Friday and NC State on Saturday.

Stetson “The Mailman” Bennett IV is a rising senior QB out of Pierce Co. HS. He took a visit to Wake Forest over the weekend. Bennett’s offseason has gone great and he was a top performer at The Opening down in Orlando.

Jarren Williams, a new transfer to Central Gwinnett, received his 2nd collegiate offer over the weekend. The talented class of 18 quarterback visited Florida State and after visiting with coach Fisher received an offer from the Seminoles.

Warren McClendon is a big freshman prospect out of Brunswick HS and was offered by Tennessee over the weekend. The big offensive tackle prospect (6’4″ 275) holds 3 college scholarships – South Carolina and Alabama offered in March.

Shannon Young, a speedy class of 17 back out of Clinch County, was offered by Georgia Southern over the weekend. Young was offered by Colorado State early this spring and visited on March 26th where he met coach Bobo.

Buford rising senior offensive lineman Tyler Thurmond let me know that he has been offered by UTSA, Cornell, NC State and Georgia State over the last 2 weeks. He has upcoming visits to NC State, Maryland, East Carolina, and Old Dominion.

Eastside wide receiver Josh Sims received his first collegiate offer this weekend. While visiting James Madison, the Dukes offered the talented receiver. Expect more offers to come once colleges get to see Sims up close because his film is very impressive.

Big Maurice Campbell let me know that he had a good visit to UNC over the weekend. A mixture of FCS and FBS schools have shown heavy interest in the 6’7″ 320-pound offensive tackle for the class of 2017. 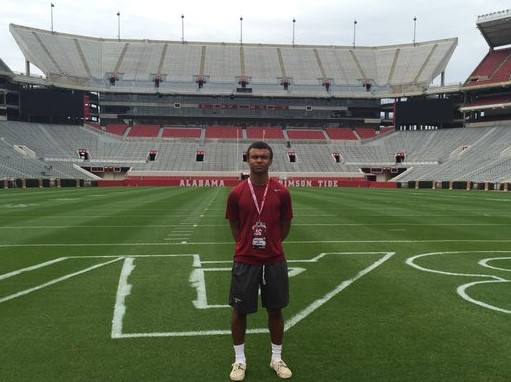 Max Prep Freshman All American Dominick Blaylock was offered by Alabama after visiting on April 1st. The athletic receiver from Walton started to received interest as an eighth-grader from Power 5 schools and now holds offers from most of the top schools in the southeast.

Lovejoy’s rising junior Zion Custis killed it at the Rivals Camp in Atlanta over the weekend.  He was incredibly hard to guard in 1 v 1’s (Video 1 & Video 2 from Camp). Custis also let Recruit Georgia know that he ran one of the fastest 40 times (4.5) at the MVP Camp (+250 players at the camp) a few weekends back.  FBS schools look to be all over Custis, and expect to see plenty of visitors during Lovejoy’s spring practice.

Ringgold Freshman Andre Tarver is one of the more promising athletes for the class of 19 in Georgia. The electrifying athlete visited UGA on 4/2/16 – expect his recruitment to really pickup in the next few months.

Buford cornerback KJ Anderson was offered by Eastern Kentucky over the weekend.

Rashad Torrence is an elite middle school defensive back. He was awarded the Top Overall DB at the Next Generation All-American Camp over the weekend.

Recruit Georgia was told by a source that Corey Reed Jr has transferred to Roswell HS. Reed is an extremely impressive athlete, already with FBS offers, but expect many more to come. Power 5 schools are expected to be in heavy attendance at Roswell’s spring practice and once they get a glimpse – lookout! – WATCH FILM