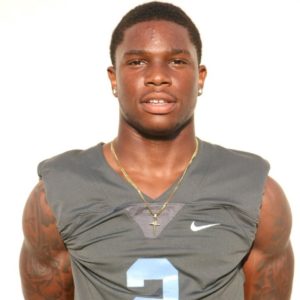 I'll stand out because of my surprising strength running hard between the tackles. I have good acceleration, speed & power. With a skill set for catching & blocking!

Good family lineage in football, Custis is an impressive 2018 running back. He is short but stout back, who has terrific balance.  He does not go down on first contact and fights for extra yards. The first 20 yards he shows a good burst in speed and he does a great job of planting his foot and turning it up field. Custis receiving skills are elite for his class and he could be deadly on multiple screen plays, where he is capable of ripping off 10-20 yard plays. Major improvements in the weight room (50-60 lb increase across the board) has turned Custis into an every down back at the HS level. He ran for more yards last season against state runner-up Tucker than any other back (over 250 yards). At the NIKE combine this spring in Atlanta he tested out 4th out 75 running backs and #19 overall out of +300 athlete competing. Custis is a workhorse in Lovejoy’s offense and perhaps the most telling number is the increase in his yards per carry from junior to senior year – he jumped up from 7.9 to a gaudy 10.37!