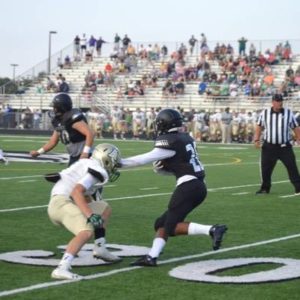 Montgromery was voted by the AP in Georgia as Class AAAA Defensive player of the year after his outstanding junior season. The 2018 recruit is a great defensive player, with good instincts, outstanding vision reading the play and elite speed at his position. Montgomery has been timed at multiple college camps running a sub 4.5 40 time which allows him to be all over the field on defense. Montgomery does not just play defense, and is an explosive playmaker out on the perimeter in his slot back role. Montgomery was a rare unanimous selection at All-State making it for the AP, AJC and Recruit Georgia. Colleges will have their reservations on his size but Montgomery is a natural football player with a penchant to make a big play in a game. FBS colleges should be all over the North Georgia playmaker during this offseason.