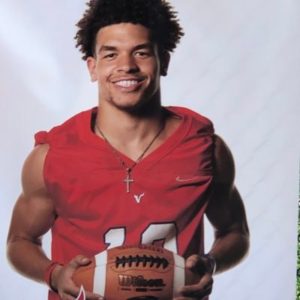 Summers jumped out of the gates as one of the leading rushers here in Georgia in 2020, but sort of fell off in the 2nd half of the season. It looks like potentially that his team just didn’t play a lot of games due to covid. he does have good speed, that’s shown in the many long runs he pulled off against Columbus alone where he went for 300 yards. Summers has great hands and is very impressive after the catch. His basketball background really shines, which BTW, that’s the sport the 2021 recruit played back in 2019 after moving in from Michigan the year prior. He has played football prior to his senior year in Michigan as a sophomore, but he is a much better athlete now. Summers has very good acceleration. He needs more time in the weight room, but his ability to get upfield is significant. Probably the best play we saw this year was Summers lined up at WR, where he leaps up for the football and is immediately hit, but he spins out showing great balance and reactivity, then outruns the rest of the defense for a touchdown. Either way, Summers has seen his production drop off the tail end of the year, but still think he is an FCS caliber back considering his acceleration and balance.