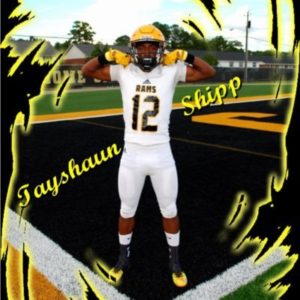 Shipp was more of a safety recruit back his junior, and watching him take long pursuit angles and either breaking up a pass or stopping a play in run support is definitely impressive. Well, something I don’t think anyone would have predicted was the senior year he put up. First off, he made a much, much bigger impact on the offensive side of the football. Shipp always showed very good field vision his junior year, and he had very good speed coming across the field to make tackles from long angles, so seeing him make hard cutbacks against the grain when running the football is not a big surprise. The 2021 recruit has a good feel for the game. He’s definitely stronger in the lower body, which was a major area to improve from an athletic standpoint, and you see Shipp step out of tackles and get extra yardage. He was used a lot on screen passes, and for one his ability to hit top speed quickly is a good reason to exploit that play. Shipp is also a deep threat though, and at the next level is a good fit to play slot receiver given his quickness and acceleration. Shipp improved probably more than any other WR in the class of 2021, and he ended up being one of the leading receivers in the state with over 60 catches and 1100 yards receiving. Another aspect of Shipp’s game that I like a lot is his toughness and passion for the game. He still has a lot of room to improve in the weight department, but hard to ignore the jump he has made, and if he continues that same progression arc over the next few years, then he could end up being one of the steals of this recruiting class.