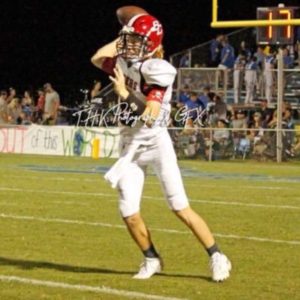 Leader and will to win

The class of 2021 QB has grown an inch and gained 10 lbs over the last year. Mikell has long arms and does a nice job of rotating his torso as he follows through on his release, creating a nice tight spiral. He was under a pressure a good bit from watching his film but made some nice passes while rolling out due to pressure. Also, a pretty good runner who drives his legs thru the tackle. Watching some additional junior clips, and he is definitely doing a better job running the spread offense. Much more of a threat running the football. Needs to see the whole body of work, but I think there is some legit talent with how well he tosses the pigskin. Mikell wasn’t fully healthy as a junior, but the senior year he is coming out strong with 1043 yards, and 15 touchdowns in just 5 games. He definitely has a gunslinger mentality, and we like the creativity he shows in the pocket to prolong time and find open receivers. His ability to make plays on the fly is an asset, but at the same time, we see him make dangerous throws across his body over the middle of the field. Mikell is a QB that we have liked since his sophomore year but admittedly lost track of during his junior year when he was out with injury, but again his film has impressed his senior year and given his 6’3″ frame, he should honestly get solid looks down the recruiting stretch here.