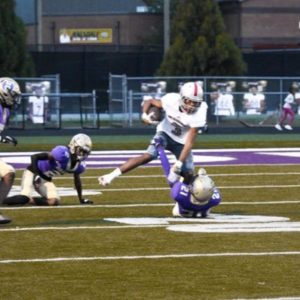 My work ethic, attitude, and my dedication to being the best student athlete on and off the field.

New Manchester has some legit offensive weapons, and Laurent is one of those receivers that looks fast in pads. He burns by defenders once he hits full stride. Shows pretty good explosion coming out his cut, but would like to see him accelerate better to his top speed – that’s improved his senior year for sure. He makes his fair share cuts, but needs to continue to work on exploding out of them. He has some elusiveness to him though; will square up on a defender and throw in some nasty jukes. Nice overall balance and that shows with his weight lifting #’s too which indicate good body composition. To put simply, Laurent just needs to gain weight and live in the weight room. He plays with some swagger too, doesn’t lack confidence one bit and will take the football straight into the defender if need be. I would think he would be a good punt returner, not sure if he’s done that much tough. Laurent is a solid route runner, he has a few nice double moves, but again want to see him explode more out his breaks. When he is just running in a straight line in the open field, he looks fast – recent Recruiting Analytics video says he tops out at 19.2 MPH. He’s a solid recruit for sure, and someone that we have projected to be a D1 prospect, so far that is holding up well with 3 offers currently attached to his name.