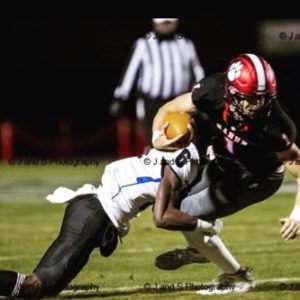 Merritt is a pretty big sleeper in this class. He is one of the more physical tacklers at CB in space we have seen. He is pretty quick, shows nice hip swivel and quick lateral movement in general. He uses his hands pretty well, gets nice leverage when getting off blocks. What I really like about the 2021 recruit is his length. He has a legit frame, great looking break-up radius. Senior film doesn’t show the same exact big hits from junior film, but still very consistent play. Adding strength, especially in the lower body, will certainly help a good bit when getting low and making a tackle – there are several occasions where he makes the tackle but gives up extra yardage. Still, he comes in very low, and cleans up a lot of tackles, plus he just flows to the football so quickly and cuts off running angles from the backside nicely. He pops bubble screens. His instincts at DB indicate more of a safety role. He’s not in a region that throws the football much, so not going to get a lot of film to evaluate pass coverage, but would still like to see more consistency raking the pass out of the receiver’s hands. Merritt is definitely one of the better DB’s still uncommitted in this class.