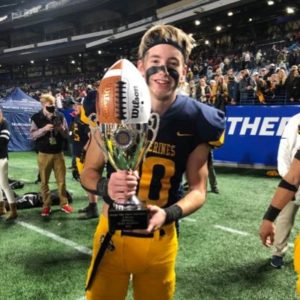 What makes me stand out is I am a taller corner and my knowledge of the game being a coach’s kid you grow up watching every day and I feel like that helped me know the game and everything about my position also as a Junior I had 62 tackles and averaged 5.2 a game having a season-high 8 against George Walton

Ridings has good length and does a pretty good job of setting himself up to make a play. He reads the play quickly. Sets up his feet well into a tackle attempt. Had several interceptions where he was just in the perfect spot. Ridings has a more narrow frame with his ranging between around 175 lbs. He reports a 35″ vertical and couple that with his 6’2″ frame and you have a pretty big radius here. Definitely a FS at the next level even though a lot of his film is at CB. Doesn’t have the hip quickness nor backpedal foot speed at this point to play cornerback. Ridings is a solid defender, but adding weight and getting more flexible quicker in the hips would be a nice improvement going into his college football career would help him blossom as a player.