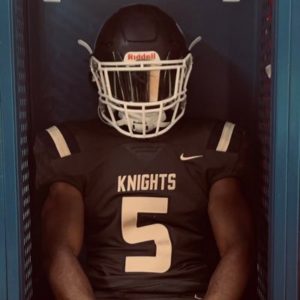 Morrison is over 1000 yards at the halfway point of the 2020 season here, and River Ridge is playing their best football in school history. So what makes the small back so dynamic? A few things. For one, Morrison hits his top speed fast. He can make a cut, then just match his foot on the gas and defenders just do not take good angles. He’s fast for sure, but still interested in his top-end speed. Colleges will probably say the same thing. What really impresses me about Morrison is his balance and ability to make defenders take bad angles. He’s good using his blocks too. If anything, I think Morrison could juke even more. Right now, he is more subtle in his well-timed cuts, but his ability to change directions is elite, and I think he could cutback more against the grain, especially when he is 30-40 yards downfield. Morrison makes some catches out of the backfield, but want to see more as well, plus he could be utilized well in the slot considering his quickness. Overall, the 2022 running back is a dynamic player, that will surely polarize college coach on what level of play he should be.