Malik Horton, a new transfer to Langston Hughes, has seen a lot of attention the last few weeks but nothing in comparison to what happened today. The talented young Class of ’17 linebacker camped at the Minority Coaches Association Camp earlier, where he received offers from Western Carolina, Samford, West Georgia and Eastern Kentucky.

Shortly after receiving the great news, the athletic linebacker announced even more offers. Tulane and Colorado joined the teams mentioned above, making a crazy day for Horton, to say the least. 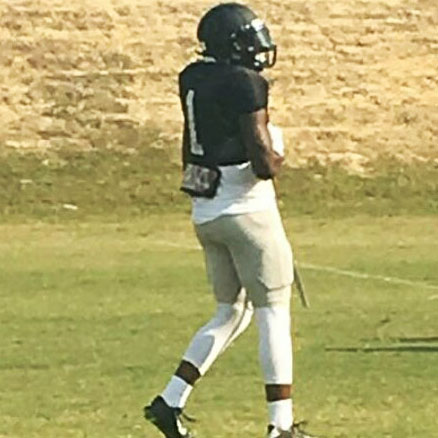 Horton is new to the state, but that has not stopped schools from taking notice of the 6’3″, 230-pound linebacker who has sideline-to-sideline speed. He now holds over 15 offers including one Power 5 from Vanderbilt.

Horton believes that his size grabbed the coaches’ attention, but do not discount his fundamentals. The young hard-hitting linebacker performs textbook tackles, making sure to wrap up and explode from the hips.

Horton’s 7v7 Langston Hughes team won the Airo 7v7 Championship yesterday (out of 48 participants!), but his summer success is just heating up. He plans to camp at UGA next week and Colorado two weeks from now.

The Buffaloes might have just offered, but Horton says “they are already showing a lot of love.” With a visit planned to Boulder very soon, Colorado could make a big impact in his recruitment.

Horton says he would like to hear from more SEC and ACC schools. The schools currently recruiting him the hardest are Michigan, Liberty, Old Dominion, Washington and South Carolina.

We expect that list to continue to grow now that the word is out on Horton. If you are interested in recruiting Malik Horton, click HERE to visit his profile.