Winning Week 6’s top play in dramatic fashion with over 4000 votes in the final two hours is Kyle Fletcher from Riverwood. The senior defensive back ended up with almost 8000 votes in the less than 24 hours, earning him the top play in the state of Georgia.

Fletcher was standing back around midfield to return a punt, but the ball was poor, and was a low line drive down the right sideline. Originally, the play was suppose to be a reverse, but with little room to negotiate, Fletcher quickly took the play into his own hands. He meandered to the middle, made one defender miss, then another, and before you know it, the senior was sprinting downfield making the final few players miss as he was escorted into the endzone by his teammates for the score.

Fletcher was simply too quick, too athletic for the Lithia Springs players to get a handle of in the open field. Many players would have given up on that play, let the ball bounce out of bounds, but Fletcher’s determination, and creative awareness to make something out of nothing led to a special teams score.

So far, the Riverwood senior has gone through some recruiting anonymity. Riverwood is a non-traditional power for football, and over the last few years there has been a good bit of turnover with various coaching staffs, so college coaches have not been marching thru the door, but that culture is changing now. 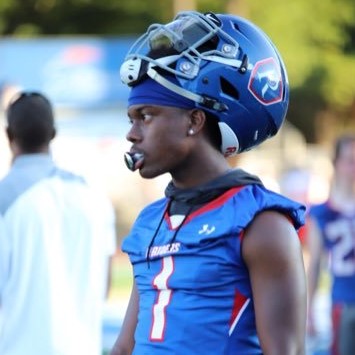 “The recruiting process has been almost non existent up to this point due to several changes on the coaching staff for Riverwood High School. But with the new head coach, former UGA standout Robert Edwards, there has been more college coaches taking note of the talent at the school,” Fletcher said.

Edwards contacts run wider than just college coaches walking onto campus tho, and players like Fletcher have been the beneficiary.

“Having former NFL DB player Josh Gordy as my DB coach and an occasional drop in from Hines Ward, I have learned a tremendous amount, and ready for next level of college football.”

Take a moment to watch the Riverwood senior’s film, and you will notice that he has very good footwork, especially right when the ball is snapped. He is physical in press coverage and has very little wasted motion with his footwork. It was no real surprise to hear that the speedy senior worked with several trainers this offseason.

“Over the summer I worked out with two of the best trainers in Atlanta on speed, agility and DB drills with Lilian Abdelmalek @ lilydstraining and Coach William Lee at DASH Performance.”


At 5’11” and 180 lbs., Fletcher has an excellent frame to play CB at the next level. He’s made some really nice improvements from junior to senior year, and some of that can be contributed to his experience playing 7v7 football this offseason.

“As a part of Hustle Inc. 7v7 with Coach Tony Ballard, I was able to adjust well while working with skilled new team members. This provided the opportunity for me to compete on a level that allowed me to show talent and improve in key fundamental areas quickly.”

Fletcher models his game after Deion Sanders, and you can see some ‘Primetime’ in how quickly he breaks on the football, and the highlight special teams plays that he is capable of. His lockdown play is in one part athleticism, sure, but more than anything, it’s his attention to detail.

“This season has showed my hard work has paid off. Its not just in the stats or on the film, but to stay with the ball regardless and stick with the receiver.”

In 5 games, the ball has hardly been thrown to Fletcher’s side of the field, but the senior maintains preparation and focus. “(I) always stay ready because I have to respect the route and know that at some point it may be thrown to my side.”

That same patience will come in handy for the college recruiting process. Right now, recruitment is slow for the senior, but with solid game film early on, and exciting plays like the one he made last weekend, there will be programs jumping on board with interest.