Christian Charles is a name to become familiar with if you are a college program serious about recruiting athletes from the state of Georgia or even just a fan of high school football here in the state. Unless you haven’t been keeping tally at home, Charles has been putting up numbers the last few years here at Chestatee.

He first caught our attention during his sophomore year where he threw for 1781 yards, albeit with some aerial inconsistencies, and even more impressively, Charles rushed for 1446 yards. Junior year there was definitely a jump as a passer. He trimmed down his interceptions and double his touchdowns to 14, and eclipsed the 2000 yard marker through the air. Also, Charles improved his QBR by 20 points up to 75.5. The swift-footed signal-caller remained dangerous running the football with 921 yards rushing and 10 touchdowns as well.

That’s two seasons now where the 2021 recruit has produced over 3000 yards of total offense for his team. He’s an explosive player in the open field, making quick timely cuts, and showcases that type of big play ability that will peak colleges’ interest.

Just last week, Charles earned his first P5 offers from Washington State and Tennessee. In fact, in the last few weeks Charles has seen an explosion of college interest from FBS programs, and he is quickly becoming a commodity in the recruiting realm.

“The interest is amazing! I’m incredibly grateful for all of it. Like as a younger kid you always dream of getting your first offer, and having an opportunity to play in college, and now that I have that opportunity.. I am incredibly grateful and thankful for every person that has helped me develop into the person I am,” Charles said about the recent flurry of college offers.

There are several more schools scoping out the 2021 Chestatee play-maker. Yale, Liberty and App State have all expressed heavy interest just recently, and you can expect more momentum among P5 programs here too. So with all the college interest around Charles, what position are they exactly recruiting him at? 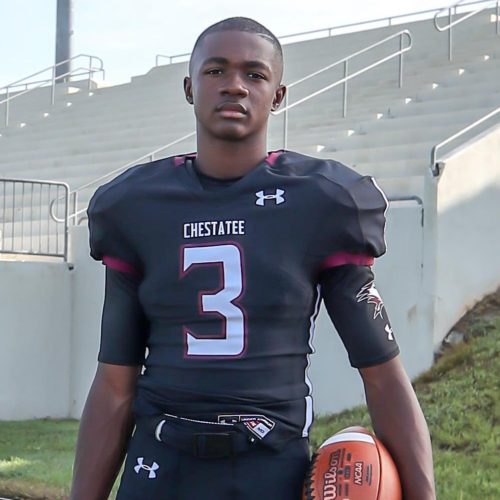 “Schools recruit me at both ATH and QB – I really can play a lot of positions, which I kinda believe makes me pretty unique,” Charles said.

That sort of flexibility and openness to new positions should only bolster Charles among college programs. Looking back at our scouting report from late last year, this is interesting passage we had about his development.

“Charles is a quick decision-maker with the ball in his hands, he can make one juke and get up field quickly. Throwing motion has improved a good bit in the last year, specifically stepping into his throws and shifting weight to his front leg. Showing some real zip while on the move. Charles is definitely an athlete. Very fluid runner. If playing QB does not pan out, then he could definitely play some receiver too.”

Talking with one FBS coach, they definitely like what they see on film, stating, “He is a very good athlete and competitive on film.”

It will be interesting to see where Charles’ recruitment will be this time next fall, but that aside, the rising senior wants to have strong finish to his high school career.

“My goal for next season is really to make it one to remember, and to go out of my high school career with a bang.”

No doubt, Charles could very well find his name on the All-State team come next fall. He has always been one of the more explosive players in his classification, all while going up against teams who are consistently in the top 10 in 4-A. Now there are new names in 4-A going into the 2020 season, and perhaps a more open region as well for Chestatee, so watching Charles lead his squad will be definitely worth the watch.