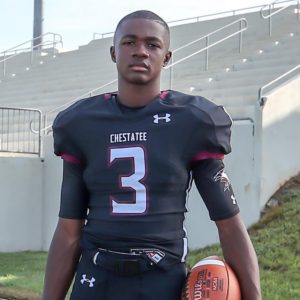 Over 3000 yards soph and junior year. 2018 4a Co-Offensive Player of the year. Started Varsity as a Freshmen. All-State Honorable Mention

Charles has been a dangerous dual threat QB at Chestatee rushing for over 1000 yards his sophomore year. He has a long slashing running style where he eats up yardage rather quickly. Doesn’t always get a lot of protection, so very quick to take off and run, but at the same time, his senior receiver is one of the leading receivers in the state, so he definitely has the qualities to be a dual threat QB at the next level. Charles is a quick decision maker with the ball in his hands, he can make one juke and get up field quickly. Throwing motion has improved a good bit in the last year, specifically stepping into his throws and shifting weight to his front leg. Showing some real zip while on the move. Charles is definitely an athlete. If playing QB doesn’t pan out then he could definitely play some receiver too. Going against one of the best defense in Marist as a junior he did a pretty good job with a few explosive runs and a long throw. Definitely seems to air the ball out well. Sometime it does hang up, and not sure these ball would pay off in college. As an athlete he has a lot of versatility. Charles 38″ vertical jump and 6’1″ 180 lbs. frame suggest that he could a good college receiver, and we see some similarities to Tobias Oliver who played at Northside Warner Robins a few years back now.