Recruit Georgia has only been around for a year, and over that time we have spoken with a lot of impressive young men, but one player who has maintained consistent contact is the high-character athlete Matthew J. Castner.

The 6’1″ 300-pound interior lineman for the Blessed Trinity Titans has been one of the driving forces behind the teams recent success over the last two years. He spoke with Recruit Georgia about the season and a little about his recruitment. 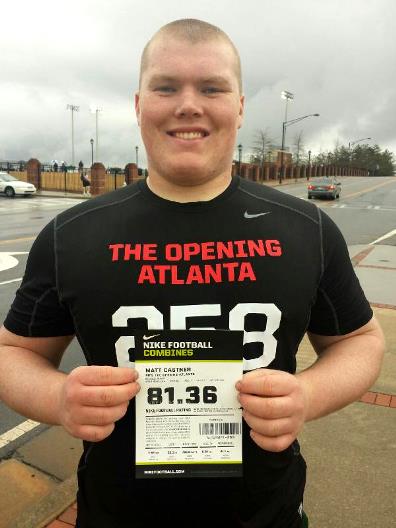 Castner does just that on film. The preseason first team all state offensive guard consistently gets +6 pancakes per game and forklifts defensive lineman routinely off the ball.

The Blessed Trinity student athlete’s goals do not just stop on the football field, “I want to work on my footwork in practice & want to earn all A’s & B’s in the classroom. I expect to work incredibly hard and expect successful results”

Coming up short a year ago was tough for the Titans, who’s undefeated season was stopped in the state semi’s against Washington County. Castner messaged us soon after the loss with already big expectations for this fall.

He told Recruit Georgia, “We will take it one game at a time, but the goal is to win our Region and win the State Championship. We have the opportunity to do that if we stay focused and continue to work hard.”

So far, #2 ranked Blessed Trinity has done that, and once again started the season strong with an undefeated record.

Castner currently has a top 3 but doesn’t want to announce it just yet, and is open to any teams interested in his services. The senior said he is mainly “focused on my team and working hard on winning every game with my teammates.”

The road-grading o-lineman has three planned visits for now. Georgia State, Lehigh and Army, all have expressed long-term interest in the senior, and will get visits this fall. UAB is another school he wants to visit but they will not be starting football (again) until 2017.

With half of the season left to play, Matthew Castner is excited about what the future holds, while also living in the moment and enjoying his senior year.

“I am very grateful to have this last year with (my teammates) and the coaches at Blessed Trinity.”