Casey Holman has achieved a lot early on in his high school career. After his dominating junior season last fall, he earned first team All-State, and today, he finalized his college decision when he committed to the Duke Blue Devils. 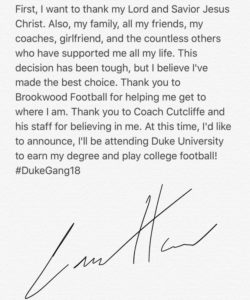 Holman was a beast last year for Brookwood, leading the way for fellow teammate Dante Black to rush for nearly a 1,000 yards on the season. This offseason, the powerful offensive lineman was becoming a national recruit, receiving a ton of attention from Power 5 programs across the country.

Holman had a little over 25 offers, and Duke had to beat out traditional college powerhouses like Southern California, Oregon, Auburn, and arch-rival North Carolina, as well. At 6’5″, Holman has the frame of a traditional Power 5 offensive lineman and he moves exceptionally well running a 5.02 40-time.

Holman’s 3.7 GPA seems like a perfect fit for a high-academic school like Duke, and he looks like a key pickup for the Blue Devils early on in the class of ’18. He is currently ranked the #7 interior lineman in the state according to our Version 2.0 rankings, but expect him to move up in the next edition.

The rising senior from Brookwood is the 4th commitment in the class of 2018 for Duke, and he joins fellow Peach State star Taiyon Palmer (#5 CB in GA) from Archer. Once again it looks like the Duke Blue Devils will have a strong recruiting class in the state of Georgia, but that is becoming a common occurrence at this point.