Arabia Mountain senior Terray Bryant is a name to mark down on your recruiting big board. Standing only at 5’11” and weighing 205 pounds, the Class of ’17 prospect might not fit the mold of an ideal FBS linebacker, but his game says otherwise.

Bryant, a preseason All-State selection by our staff, ran away with the Week 1 vote for Top Play. For the winning play, the senior playmaker flew to the ball-carrier, raked the ball out of his hands, recovered the ball, promptly threw a stiff arm then went racing down the sideline for an amazing 70-plus-yard defensive score.

Watch the senior’s film from last season, and you will realize that this is a regular occurrence. In fact, Bryant had a massive junior campaign where he totaled 134 tackles and 13 tackles for loss while causing five fumbles and getting one interception. Those efforts earned him first-team all-county and all-region honors.

We caught up with the impact linebacker from Arabia Mountain to talk about where his recruitment stands and how he has improved. 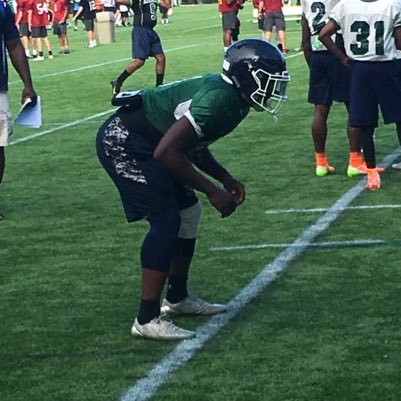 The senior is a natural on the defensive side of the ball and does an excellent job of tracking the ball-carrier. He believes his versatility and coachability is what separates him from other prospects. “I would say I am very coachable and versatile. I am able to play almost any position on defense.”

Bryant understands both his strengths and weaknesses. “I am strong in stopping the run and forcing turnovers but I know I need to work on my pass coverage.”

The senior looks like a weak-side linebacker at the next level. He led DeKalb County in tackles last season and looks to repeat this year. Bryant flies around the field and is a natural at seeing the field and flowing toward the ball-carrier. He plays with high energy and is an excellent tackler, being sure to wrap up the ball-carrier securely. His competitive style of play has caught the attention of Navy and Western Carolina, but we would not be surprised to see more schools interested as we progress into the season.

The slobber-knocking linebacker is currently thinking about visiting two schools this fall. “I haven’t made plans to visit school this fall yet but I would love to visit Florida State and Western Carolina.”

Bryant started off his high school career at Riverside Military Academy, but after last season at Arabia Mountain, he feels a connection with his teammates and school. This will be his final year of high school football, and he wants his Rams squad to make school history.

“My goals are to help my team go to the playoffs for the first time in school history.”

The Rams have started off the season hot, winning 50-0 against Stone Mountain. Bryant and his teammates are a talented bunch, and they look like they could be a surprise this fall.