Samuel Bryant, a Tucker HS rising senior running back, let Recruit Georgia know that he had committed to Kennesaw State today. The fleet-footed back announced his commitment earlier today on Twitter:

It wasn’t too long ago that we wrote about Bryant landing his first offer from Charleston Southern. As we expected, more schools hopped on board, and the class of 17 back now holds 7 offers. Bryant choose the young Owls over established programs like: Eastern Michigan, Southern Miss, Charleston Southern, and Youngstown State. 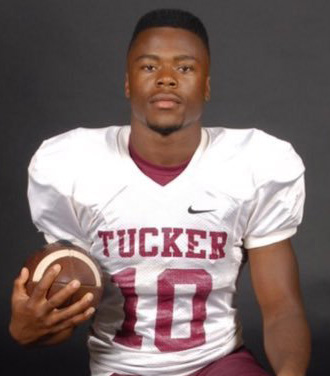 We asked the new Kennesaw State commit on what it feels like to put an end to his recruitment. “It feels very good to be done with the recruiting process. This process is very stressful and that’s why it is good to have support and to follow your heart.”

Bryant has an outstanding support system around him with his parents instilling a positive mindset throughout the recruiting process. “If I listened to others beside my parents, I would have been easily negatively influenced, and I would still be frustrated to this day.”

The revolving door of the recruiting world leaves a lot to be desired. Bryant talked with KSUOwlHowl.com about the recruiting process and how the Kennesaw State coaches believed in his abilities.

“I chose to commit to Kennesaw State because I felt at home. They contacted me about 3-4 times a week. I felt as if I was a priority and not just a guy that they kind of wanted.”

We expect Bryant to be a perfect fit at A-back in Kennesaw’s spread option attack. His 4.36 40 time speed will put pressure on the opposing defenses, and once he sees a seam, the class of 17 running back is gone for pay-dirt.

Bryant is the first commitment for the class of 2017 for Kennesaw State. The Owls will once again look to have big class in-state, so stay tuned to @RecruitGeorgia to hear the latest.