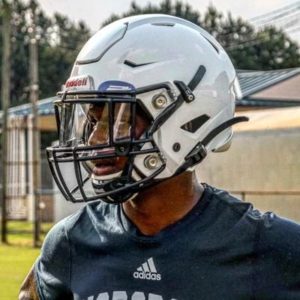 Goodman has proven to be a pretty good route runner and shows borderline elite ball skills. He can catch through the contact, that’s seen in his limited action on varsity and also at some summer camps. Goodman was originally trained as a QB, and that’s what he had seen early on during his HS career. He just so recently transitioned to WR. No doubt, he’s very coordinated. He definitely looks to be in better shape going into his senior year looking a lot more explosive coming out his breaks. Also had added some good muscle over the last year and now up to 180. We didn’t really know what to expect from the summer hype, but he has certainly lived up to it in the early 2020 season. His ball skills are definitely legit. He made 2nd team All-Region his junior year with only 14 catches and less than 200 yards. In just 3 games during his senior year he already has 283 yards, 13 receptions and 5 touchdowns. It’s clear he is set for a big senior year, and could potentially push for a 1000 yard season. Biggest thing with Goodman is his coordination is off the charts, and his hand eye coordination really sets him apart from most in his class. Couple with the fact that he has improved so much in the last year at receiver, if he continues this progression arc there is little doubt he cannot play FBS football. I think continuing to make plays after the catch will only embolden his chances.