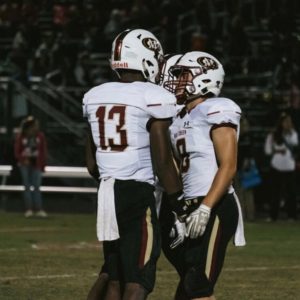 I was awarded first team all region DB (first year playing DB on varsity level) and Honorable mention for all state, and I understand the sacrifices and with ethic needed to be a successful collegiate athlete

Clarke has been a player signed up for some time now, and just from a pure athlete stand point he has always been a player on our radar. Even as a freshman he was one of the best track athletes at his HS. Clarke is tough to get down in short spaces, his springiness, makes for some quick cuts. Clarke deploys a north-south approach when carrying the football. Clarke made some very tough catches down the middle of the field, taking some brutal hits last fall, but didn’t put up big numbers as a receiver. Offensive production aside, his athletic prowess will create FBS intrigue, especially as a defender, which seems to be a more natural fit for the 2020 recruit. Looking at his frame, and I really like Clarke as a SS at the next level. He is a brutal hitter and very quick to step up to plays in the flat. Really like how he breaks up passes too. just attacking the wide receivers hands while he tries to haul it in.