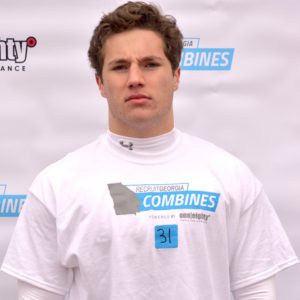 Two way starter, One of top iron men on team

Nardone was a big time player for Fellowship as a sophomore, and his quickness to the football is legit. He ran a 4.38 laser time shuttle, but his 5 second 40 time was equally impressive for a young linebacker in fact. Nardone has very good upper body endurance where he benched 185 lbs 20x. The 2021 recruit reads the play very quickly and does a nice job of settling into a tackle. is tough as nails, shows strong hands getting off blocks. You can tell that his time as an offensive lineman has Nardone very comfortable fighting off players bigger than him. His active hands and lateral quickness is really impressive for a 2021 recruit. Nardone is just a hard-nosed football player, you can tell that he works had at his craft, and will continue to add weight. Biggest thing for Nardone is to continue to improve his speed as he gains weight, but really like the high IQ recruit.