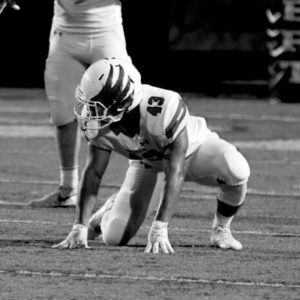 I give effort every single play and take practice seriously. I am the most selfless player. I’m all about my team and helping to get a win. I’m quick off the ball and always looking for ways to get better. I was captain for my team.

Uribe is the definition of a hustle football player. He puts his body on the line against much bigger competition. He plays with powerful hands, and has the lateral quickness to just blow by the offensive tackle on a swim move. He went up against some solid RT’s this season and more than held his own. He made a few offensive tackles that we have scouted look downright silly, and actually really angry after the play, so he has a way at eating away at his opponent. Uribe doesn’t have very good footspeed, if he did then we think he could play at a higher level and potentially transition to linebacker. I think some local NAIA schools will be interested. He made first team All-Region senior year.