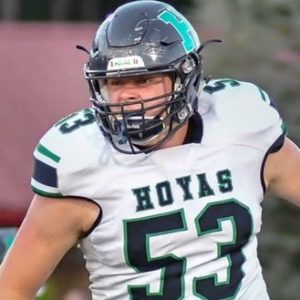 The 2020 center is quick to engage and has powerful hands at the point of attack that can throw a defender off balance fast. Storey is very productive on film, and he does an excellent job of gap control in the middle where he meets blitzers and helps with defenders moving pretty well in the A gap. Storey disposes of several D1 caliber DL on film. Harrison plays a tough schedule, so Storey has plenty of quality film against opponents. He would be very good in a zone blocking scheme in college, it fits his blocking style and physical abilities very well. Storey has added 10 lbs to his frame, and is heading into his senior year looking to capture college’s interest. Working on his hip flexibility, keeping a flat back while blocking will really help with his explosiveness at the point of attack and something he should really hone in this summer. Storey has very good fundamentals, he gets up on his toes while blocking. He also added 40 lbs increase to his bench max since last fall, now time to focus on the hips. Storey made first team All-Region and led his team to the state title game.