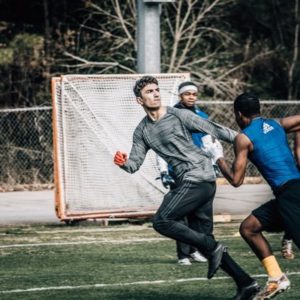 My ability to get open against any type of defense and my high football I.Q allows me to gain an edge on my opponents. Also I am a very good blocker and I pride my self on blocking any defender in front of me. I am projected to start on my varsity team as a sophomore this upcoming year.

Das took to wide receiver after get split between DB and WR early on his career. Junior film really showed a lot, especially in a more conservative offensive attack that eats up the clock, but it was really just an epitaph to his senior year where he was one of the most efficient receivers in the country. His 31.3 yards per catch was #1 in the state and #5 in the entire country according to maxpreps’ database. He has a nice fluid running motion, does a nice job coming back to the pass. Has a few deep passes where he burns the defense pretty well. I like Das ability to block in open space, he gets consistently solid leverage. Overall he’s a solid prospect. I like his potential to be a slot receiver at the next level. His route running has continued to sharpen up, and safe to say, he is one of the most efficient we have seen in this class now. He does a nice job going up top and playing the football, just a naturally good athlete. Route running is by far his best skill set, very quick coming out his breaks. Throw out all the numbers, turn on the film, Das has the type of football speed that has made him one of the most dangerous receivers in the state this season going against top rated competition.