Sean Holton is the most recent winner of the Recruit Georgia Play of the Day. The rising senior showed off his coverage skills and hands on a trick play attempted by Ridgeland last season. Key word “attempted”; the rising Cartersville senior was not fooled and broke deep, making a miraculous diving interception.

We talked with Holton about how his offseason is going and goals for this upcoming season. 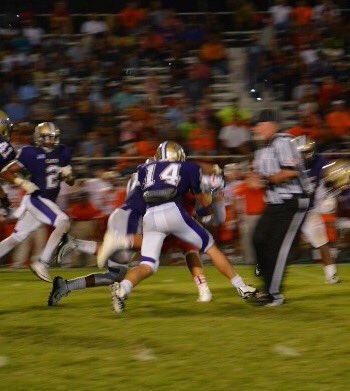 “My goal next season is to win the state championship again,” he said.

Holton is a team-first player. He welcomes the idea of playing anywhere in college but admitted “my favorite position to play would be OLB.”

The Cartersville outside linebacker models his game after Lawrence Taylor, and if you watch him on film, you see that same big-hitting mentality that made the NFL Hall of Famer legendary. The 2017 athlete plays the game with his hair on fire and flies all over the field making tackles from sideline to sideline (4.65 40 time).

Holton believes his football IQ gives him an advantage on the gridiron: “I think my biggest strength is that I’m smart and I know what I’m doing.”

Davidson and Columbia are the only two schools to have contacted the student-athlete, who currently boasts a 3.84 GPA and 1110 on the SATs. We expect more schools to become interested in Holton as summer camps approach, especially Ivy League schools.