Nick Lancaster is our most recent Play of the Day winner. The Class of ’17 linebacker showed off his impressive football instincts and quickly reacted to a short pass out in the flat. Before the receiver could make a move, the fleet-footed linebacker was already drilling him backward for a punishing tackle.

The Johns Creek rising senior has been working hard this offseason and spoke about his goal for this upcoming season.

“My goal for next season is to win the 6A State Title and be named to 1st team all state and all region.” 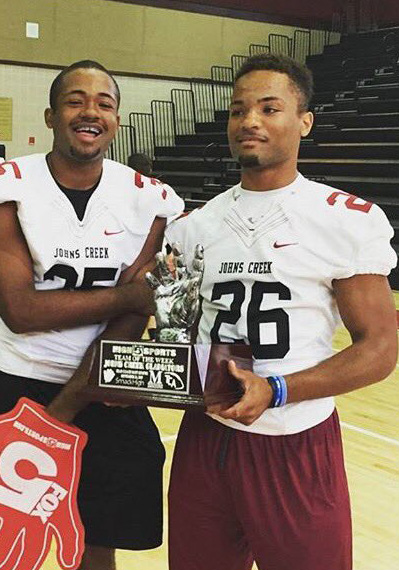 Lancaster holding some hardware on the right

Those are lofty goals, but the senior linebacker has been working hard this offseason to improve his game. He believes that he could help a team in a number of ways at the next level.

“My biggest strength I feel like is how quick I can explode off the ball, my swim moves, and not being afraid to knock somebody’s head off.”

Standing at around 6’2″, Lancaster could easily pack on more weight to his frame. It is an area he is dedicated on improving.

“I think honestly I need to improve on my weight. Right now, I weigh 202 lbs and I’m working on that.” Lancaster also believes his pass coverage could improve. “I need a better pass drop. I need to really focus on my fundamentals and playing coverage at outside linebacker, it is a position where pass coverage is important.”

Lancaster has been hearing from a number of colleges so far, and it looks like one stands out above the rest.

“I’ve been hearing from a lot of schools but my top ones are Alabama A&M, Army, Ball State, Marshall, Middle Tennessee, Marist, and Clemson, but for me, I want to play for Marshall. I love the program.”

The hard-hitting senior’s favorite position is playing out in space at a hybrid outside linebacker/rover type position. He models his game after a few family members.

“I model my game after my older brother Mark Lancaster a lot. Just the way he grinds and grinds and is constantly working to get better, that is a motor to me. Also watching my cousin Grady Jarrett get to where he is now is a big-time impact to me. Growing up in Rockdale isn’t easy, but to make it to the NFL is just ‘wow’ to me.”