Ringgold senior wide receiver Mac Brower is our most recent winner of Recruit Georgia’s Play of the Day. The high-point expert went up over 1v1 coverage and made a miraculous one-handed catch in the corner of the end zone to win our 6/15 vote.

Brower seems to make these plays look routine if you watch the rest of his highlight reel. In fact, it was hard for our staff to narrow down his great plays. 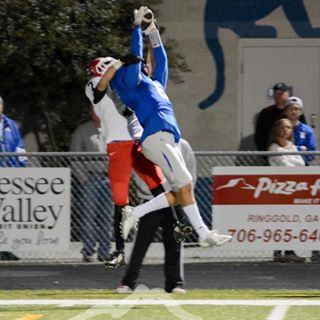 Recruit Georgia caught up with the newly anointed senior on how his offseason is going and where he stands with his recruitment. The Class of ’17 receiver is currently hearing from a lot of schools.

Austin Peay, Butler, Eastern Kentucky, Marshall, Samford, Princeton and Charleston Southern are all in contact with Brower. The Ringgold senior was a top performer last week at Marshall’s camp but has more planned in the future.

“I plan to attend both Austin Peay and Charleston Southern camps,” Brower said.

The playmaking wide receiver models his game after NFL legend Cris Carter and believes he can help out a team at the next level.

“My biggest strength is my hands, and catching fade routes,” Brower said. He said that his biggest area for improvement is increasing his speed.

More colleges will certainly be interested in Brower if he does increase his speed. He has elite ball skills and does an incredible job catching the ball at the apex of his jump. The result is breathtaking catches worthy of slow motion.

He is also an outstanding blocker and very physical player in general. Given more time for his body to develop, Brower can become a really good player at the next level.

Brower’s goal for this upcoming season is simple: “To win a region championship and make a deep run in the state playoffs.”

Opponents will certainly have to key-in on stopping Ringgold’s passing game with Mac Brower and Andre Tarver running wild in the defensive backfield.