The newest winner of Recruit Georgia’s weekly top play is aggressive junior defensive lineman Emmanuel Cater from Hiram High School. For the winning play, Cater made a tremendously big hit on a running back, which put him immediately on his seat, and consequently in the endzone.

The junior defensive lineman took time after practice to answer a few questions about his recruitment and how his junior year has gone so far.

“I would describe my junior year as exciting. Starting off in the summer, I’ve been training and working hard for the spotlight on Friday nights; going to camps for exposure, getting better with hand technique, and being explosive off the ball with my personal trainer Armond Willis and my position coach Stanley Halbrooks.”

Cater’s family has a long standing relationship with football. His father, Allen Cater Jr., has always had a passion for football, and taught both of his sons (Emmanuel and Allen III) everything that he knows. 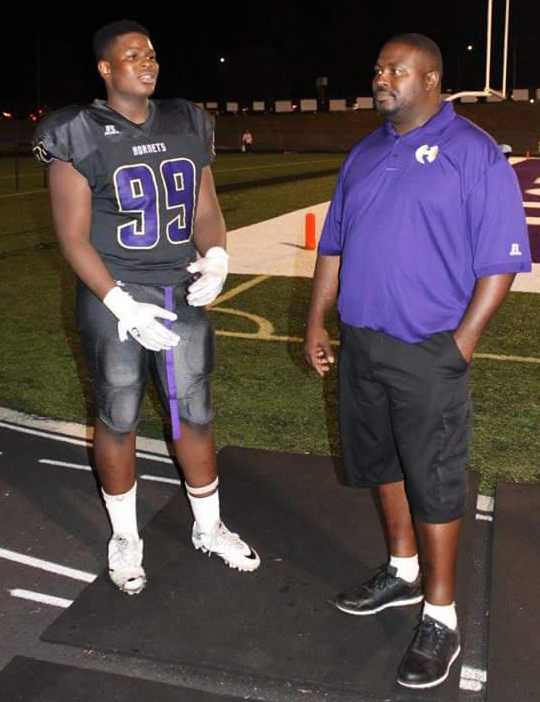 So it was no surprise to hear that Cater models his game after his father. “I model my game after my dad from watching his film from back when he was in high school, and seeing the aggressiveness, the will to hit anybody that came threw his gap when he played MLB.”

Unlike his father, Cater is down in the trenches with his hand on the ground. Watch his junior film and you will see a very physical player with strong technique already for his age. He plays with heavy hands to get off blocks, and sees the backfield very well, which allows to quickly react to all types of play calls. The Hiram junior doesn’t have overwhelming size at 6′ 240 pounds, but with his current frame, he should be able to add a lot of weight.

Hiram runs only 3 down lineman on the defensive side of the ball, so Cater has seen his fair share of double teams to say the least. Even so, the defensive tackle has 30 tackles (9 solos), 6 tackles for loss, 2 forced fumbles, 1 fumble recovery, and 4 pass breakups.

Colleges that have been contact with athletic defensive lineman have been UGA, Illinois, UNC, Georgia Tech, Georgia State, Kennesaw, Georgia Southern, West Georgia, Wake Forest, FSU, Valdosta State and Maryville. Most of this contact has been relatively new, so the 2018 prospect is taking everything in stride.

When asked about what is his favorite part about playing football, Cater emphatically responded, “I enjoy giving it my all and putting it all on the line! Ain’t nothing like competing on Friday nights and dominating who ever I line up against!”

With only 1 game left on the season, the recruiting process is really about to heat up for Cater. If you are interested in recruiting the talented Class of 2018 defensive lineman click HERE to visit his Recruit Georgia profile.