Olico Dennis was heading into his senior year as a two-year starter and the offensive workhorse for his Calhoun football team. With a big senior year already started, Dennis was hungry to build off the success of prior seasons, but that all came to a halt when he suffered a season-ending ACL tear mid-September that has put football currently on the shelf.

The Calhoun star running back had surgery on September 30th and has kept a positive outlook throughout the setback. Dennis was receiving FCS interest and had a few offers prior to the injury, but that has mostly waned over the last few weeks. 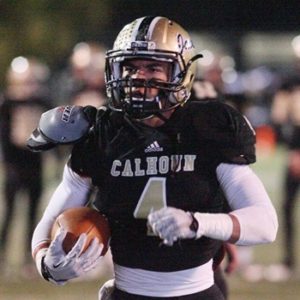 Colleges backing off after a major knee injury is all too common in college recruiting, and for Olico Dennis’ case, those colleges are making a huge mistake. Dennis won’t be ready for fall 2017, making him a perfect grayshirt candidate. The talented 2017 prospect is a proven commodity in the state of Georgia and was part of our preseason Class AAA All-State team.

Dennis (5’9″, 185 lbs) is an all-around running back with great balance and vision going between the tackles. For his career, which is two seasons and 4.5 games, Dennis had 2,282 yards rushing, 273 carries (8.3 ypc) and 33 touchdowns, while also hauling in 20 receptions for 260 yards and two touchdowns.

Perhaps the most amazing stat is the fact that he did not fumble once during his junior or senior seasons. That’s almost 20 games without losing the rock, making the Calhoun student-athlete the model of consistency at the high school level in Georgia.

Dennis is a hard worker in the weight room, touting a 315-pound power clean, 325-pound bench press and 450-pound squat. He sets up his blocks very well; once the senior back sees an opening, he uses his explosive reported 4.41 40 speed to blow by the defense. The Class of ’17 prospect is a very tough runner who will lower his shoulder pads and fight for extra yardage.

Rehabbing from a major knee injury is no easy task, but if you look at Dennis’ body of work throughout high school, it is obvious that he will do the required work and then some to get back into playing shape. We have put his senior film at the top of the article and put his junior film down below. You can start recruiting Dennis by visiting his HUDL or Twitter. Also, read more articles like this in the future by giving our Facebook Page a LIKE.