Fitzgerald, Georgia – Dublin’s main objective coming into this contest was to keep the explosive Hurricane offense off the field. For a half the Fighting Irish were able to accomplish their goals, but the inability to come from behind in their run dominated Wing-T offense eventually imploded. Fitzgerald’s defense stood tall and the offense began to click on all cylinders leading to a 42-7 first round victory.

Two long drives for Dublin only led to seven first half points, but more importantly they ate up every fraction of the 25-second clock on each snap. This strategy kept the well-oiled offensive machine of Fitzgerald off the field and out of sync. 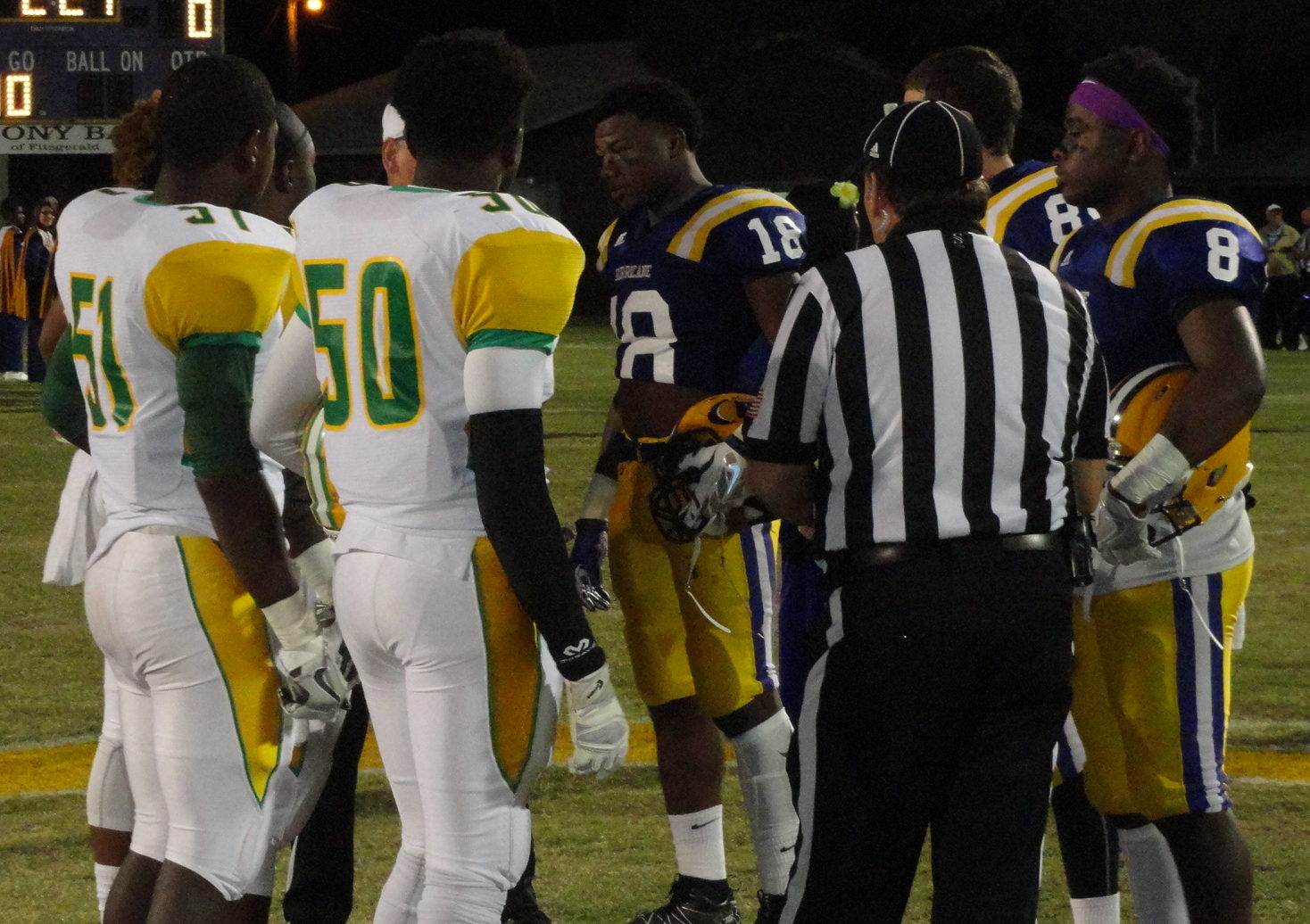 The Canes did mange two first half touchdown runs, one by sophomore Ethan Gordon from 27-yards out the other by prolific athlete James Graham from 23-yards.

Pinched between both Hurricane scores two-way standout Jermaine Coley rambled in from 16-yards to keep the Irish in the game.

Both squads failed to take advantage of deep penetration into enemy territory.

Sophomore linebacker Ashton Newell recovered a Dublin fumble on the 18-yard line. But the Canes failed to convert on a fourth and seven giving the ball right back to Irish.

Early in the second stanza the Canes again got the ball on the Dublin 25-yard line after a botched punt. But a chop block put Fitzgerald in a third and forever situation that was impossible to convert.

Dublin closed out the half on a long time consuming drive that ended in a failed 41-yard field goal attempt. To make matters worse at one point on the drive the Irish had first and goal at the six yard line. But a tremendous tackle for loss by senior safety Joshua Reliford combined with a holding call on the very next play killed any chance for the Irish knotting the score at intermission.

With time winding down in the third quarter Graham hit Oklahoma State commit JD King on a screen that picked up 46-yards. On the very next play Gordon hit pay dirt again this time from 16-yards out.

The Clock that favored Dublin in the first half now became their wort enemy. A failed fourth and two-attempt from their own 40-yard line gave the Canes excellent starting field position.
Graham immediately went to the air hitting speedster Montreil Harris for a 42-yard touchdown strike down the left sideline extending the Canes lead to 28-7.

On their very next possession Dublin failed to convert a fake punt. Two plays later the Canes were back in the end zone. King bowled over defenders on his way to a 25-yard touchdown run.
Gordon would add his third touchdown of the game with 1:55 left to cap the scoring.

For Dublin (8-3/4-2) the season is over. Not all is lost as the Fighting Irish as they are loaded for a run next year with a multitude of impact underclassmen.

Read player analysis for each team down below! 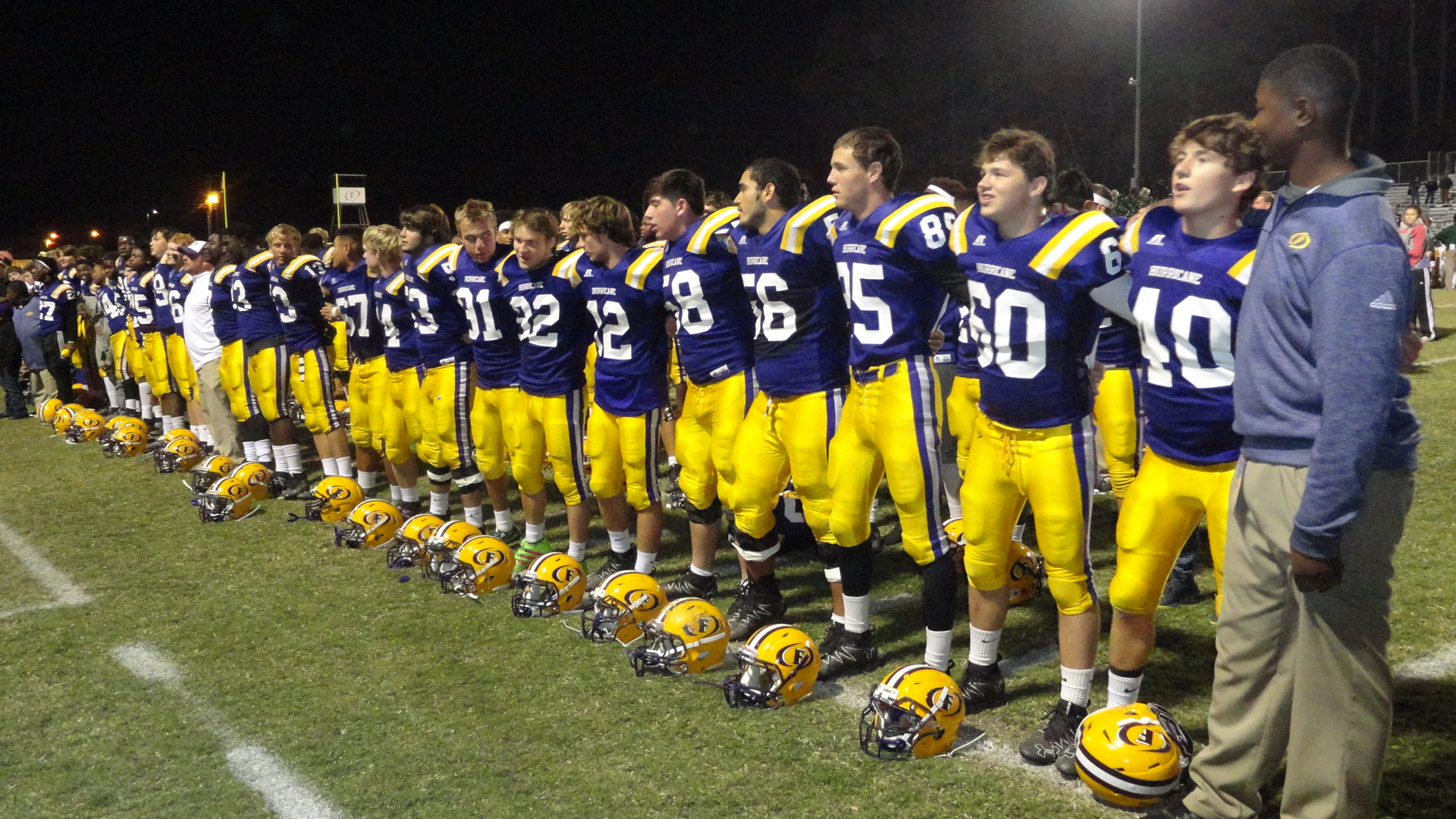 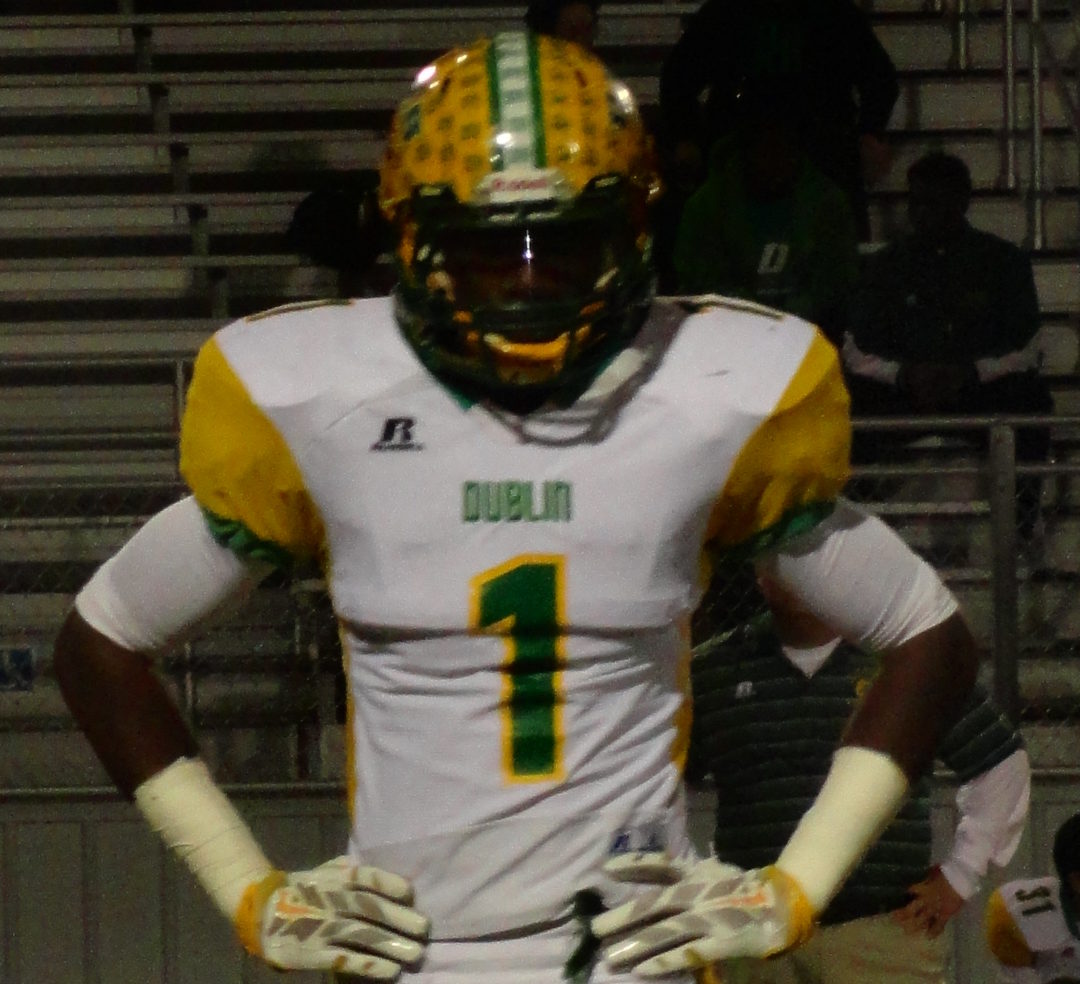 Ramon Pittman #3, RB, 5-9/190 (2017) – Pittman is a powerfully built all-purpose back that starts both ways. On the night he carried the ball 13 times for 67 yards while recoding five tackles. He demonstrated a good burst of speed through the line and the ability to make yards after contact. His biggest asset is his low pad level and the fact that is legs are constantly churning. On the season he eclipsed the 1,000-yard mark. Pittman is someone DII and NAIA schools should take a long look at as this young man is definitely not afraid of contact.

Erik Roberson, #1, ATH, 6-1/175 (2018) – Roberson definitely passes the eyeball test as a receiver or potential safety at the next level. Versus Fitzgerald he carried the ball five times for 25 yards while catching the only Dublin completion for 29 yards. Roberson also doubles as a LB/S hybrid recording four tackles and a TFL. I really like his length as a potential defensive back. In warm-ups he showed a nice smooth backpedal and was quick out of his breaks. He is definitely an athlete that college coaches should put on their radar. 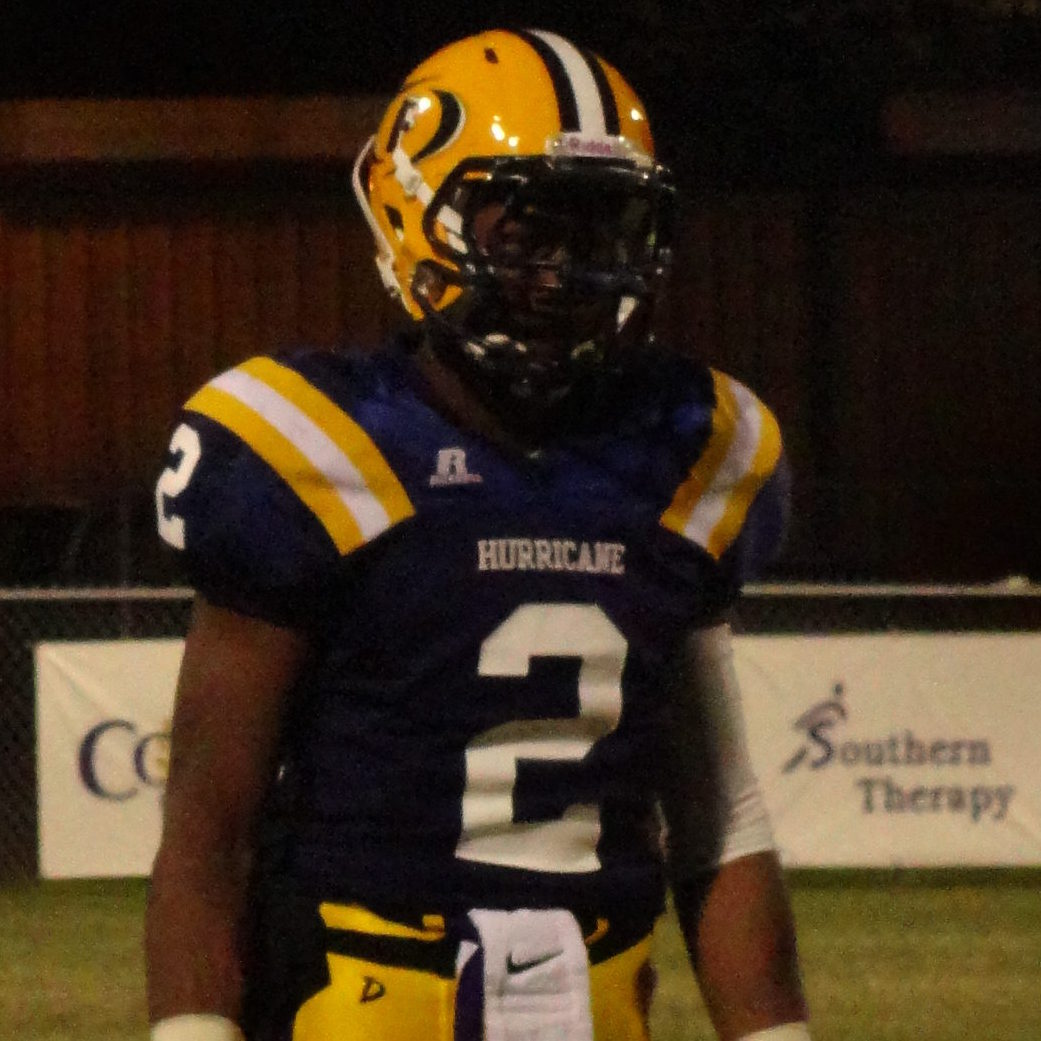 James Graham, #2, QB/ATH, 6-1/175 (2018) – Graham has been hampered with an ankle sprain for the last five games, but it looks like he may almost be back to full speed. Counting the sacks he carried the ball 11 times for 56 yards and one touchdown while completing two of seven passes for 87 yards and a score. He showed off excellent COD and acceleration on his 23-yard touchdown jaunt. When healthy this dynamic athlete is one of the most dangerous players in all of South Georgia. His athletic ability and decision making is imperative to the Canes goal of making it back to the Georgia Dome.

Ethan Gordon, #6, APB, 5-9/185 (2019) – Gordon has been splitting secondary carries with (JD King) with fellow sophomore Damien Devine. On this night he made the most of his seven carries going for 82 yards while hitting pay dirt three times. Gordon demonstrated excellent vision and very good speed hitting the holes. Once in the secondary he was able to pull away from defenders. Right now he should be considered an all-purpose back with FCS/FBS talent. On the season he has carried the ball 48 times for 435 yards and eight touchdowns while catching ten passes for 175 yards and three scores.

Marlon Jackson, #88, DE, 6-4/220 (2018) – Jackson has really come on as a real chaser the latter half of the season. On the evening he recorded 12 tackles and two TFL’s. Several of his tackles were hustle plays catching lollygagging ball carriers from behind. Jackson is the team’s third leading tackler with 76 stops, 13 TFL’s and six sacks. He has good length but will need to work on adding lower body muscle mass. If he cannot do that he must then learn to play in space as an outside backer. His continued stellar play will go a long way towards attracting the attention of college coaches.

JD King, #18, RB, 5-10/205 (2017) – King came into the game a little banged up after tacking a helmet to the chest last week. Though his carries may have been limited versus Dublin his production was not hampered one bit. King carried the ball 13 times for 101 yards and one score while catching one pass for 46 yards. On the season he has run for 1,283 yards and 15 touchdowns on 166 carries. Just as important he has been a consistent threat out of the backfield having caught 15 passes for 362 yards and six scores.

One of the most impressive plays I have seen all season was his 25-yard touchdown run where he trucked the defender in the end zone. Funny thing about that play is the fact that the defender was called for a late hit; he simply abused the would-be tackler. King is the energizer bunny as he keeps those legs churning and always lowers the pads making him difficult to tackle. 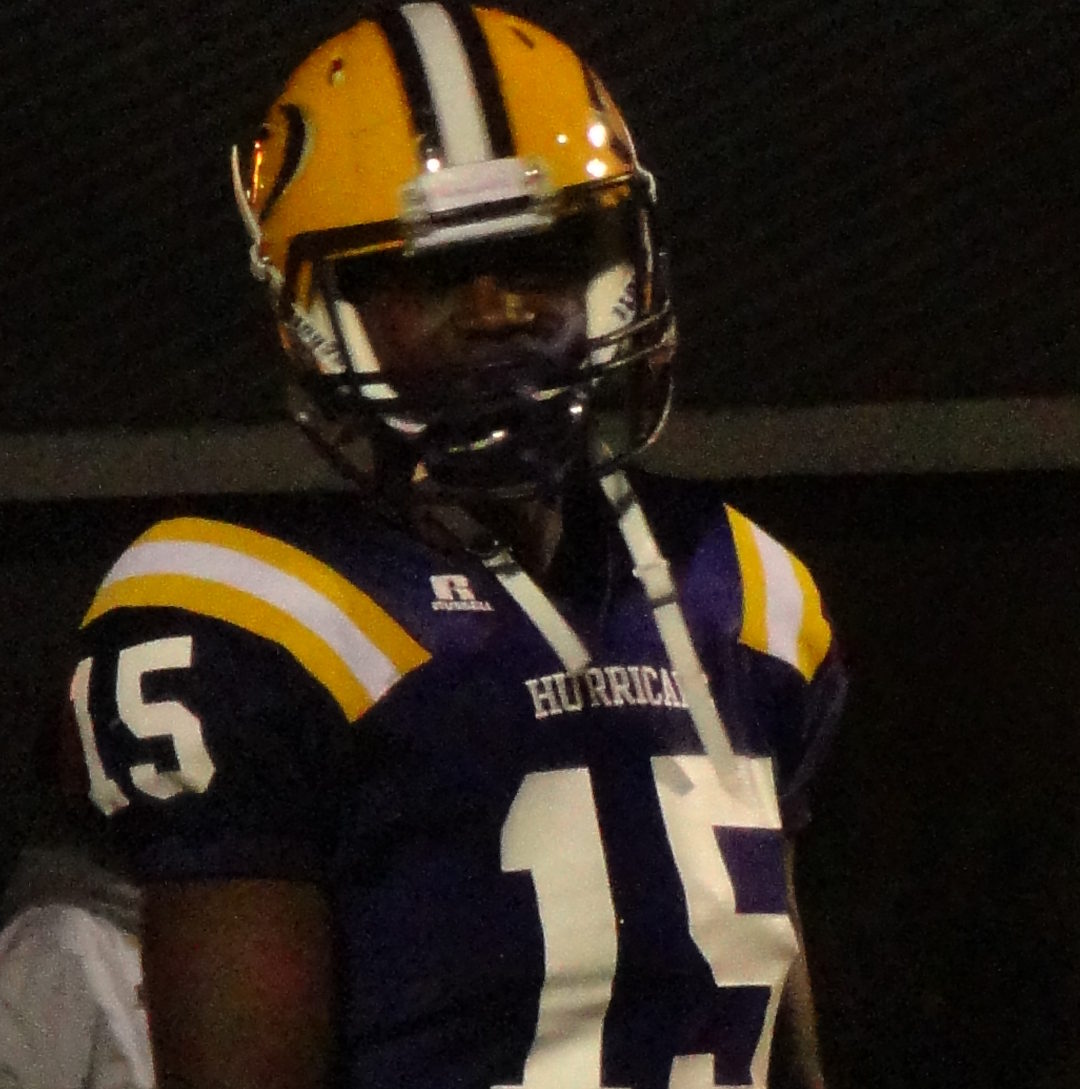 Montreil Harris, #15, ATH, 6-2/190 (2018) – Teams have wised up to Harris on kick returns. They are not even kicking the ball his way after he returned three kicks for scores on just six attempts. But the Fitzgerald coaching staff is doing a good job of getting him touches. Versus Dublin he carried the ball three times for 11 yards, one long run was called back, and he caught a 46-yard touchdown pass. On that touchdown pass he was able to catch the ball in full stride and motor his way into the end zone. Harris has excellent top end speed and the length to project at several positions at the FBS level.

Anthony Ransey, #76, NG, 6-0/315 (2017) – Ransey may have played one of his best games of the season. This behemoth nose guard was able to shut down the Irish inside rushing attack. On the night he recorded six tackles, but it was his back-to-back tackles early in the second half that really took the sails out of Dublin’s running game. He is a powerful space eater that is impossible to move off the ball. Ransey may have to go the JUCO route. Junior colleges looking for a shear short yardage run stopper need to pay him a visit.

Josh Reliford, #8, S, 5-11/185 (2017) – Reliford may lack the ideal height for a strong safety prospect but he does not lack the thickness or toughness to make plays versus the run. On the night he recorded 12 tackles and one TFL. No hit was bigger than his tackle for loss late in the second quarter that thwarted an ideal scoring opportunity by Dublin. Reliford flies to the ball and will simply light ball carriers up. He is someone FCS and DII schools should take a serious look at.

Lecitus Smith, #82, TE, 6-4/245 (2017) – Smith is probably the best looking player on the entire Fitzgerald football team. He has the body to project as an every down tight end or possibly a strong side defensive end in college. Smith was only targeted once in the game but he played a pivotal role in the Canes rushing attack that racked up 253 yards on the ground and averaging 7.2 yards per carry. He is currently committed to Virginia Tech, but if other colleges want to see him work out at defensive line they need to watch him during warm-ups were he throws his teammates around like rag dolls.