Running away with our most recent top play is North Cobb’s Christian Albright. The uber-athletic defensive end made a miraculous play where he timed his jump perfectly to tip the pass then jumped under the ball with lightning-fast reflexes for the big interception.

Albright’s North Cobb squad has a lot of talent, especially on the defensive side of the ball. Heading into the second round, the senior spoke about how the season has gone thus far. 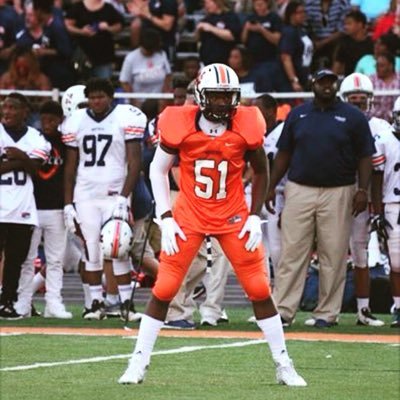 “The season has been going pretty good so far. Had 2 early losses in the season but we were able to finish the season strong and making the 2nd round definitely feels good but we aren’t satisfied with just making the second round.”

North Cobb beat Tift County in the opening round 35-7 and will be facing a red-hot Lambert team that has shocked several opponents this year already. It should be a very physical matchup, and seniors like Albright will be leaned upon to do heavy work at the line of scrimmage.

At 6’2″, 220 pounds, the quick senior has a lot of potential as a pass-rush specialist in the right scheme. He believes that his versatility is what separates him from the pack. “I think my biggest strength on the field would be my ability to affect the quarterback while also providing strong run defense to help the team.”

Albright is a really smart player, too, and that’s one reason why FBS colleges like Army and Charlotte have taken high interest in the senior.

The Class of ’17 recruit is focused on closing out his senior year but has taken a recent visit. “The last game I attended was 2 weeks ago at Mercer when they played East Tennessee State,” Albright said.

Deciding on a college is not an easy process, and the twists and turns leading up to national signing day can leave anyone dizzy with decisions, but Albright seems to have solid understanding of what he envisions his dream school to be.

“I’m looking for a college where I can get a good education with a program that is able to compete at a high level and a family atmosphere.”

Our staff has always been impressed with Albright’s potential at the next level and believes he can become a menace in opposing teams’ backfields. Between now and national signing day a lot can change for the explosive senior defensive prospect, so stay tuned to @RecruitGeorgia on Twitter to hear the latest recruiting news.