Archer rising senior Will Choloh followed a life-long dream of playing college football earlier today when he decided to commit to Georgia State. This ends the recruitment for the super-athletic defensive tackle prospect, who saw his recruitment burst onto the scene back at the beginning of this year.

Right at the start of February both in-state schools Georgia Southern and Georgia State offered. Over the next 3-4 months he received 22 offers, including from schools like UConn, Colorado State, Troy, Kansas State, and Tulane, as well as high-academic military schools. 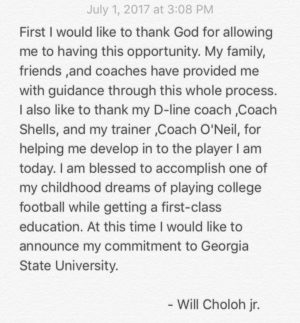 For the metro-Atlanta star it was playing close to home, and in front of friends and family; to go along with his connections with the Georgia State coaching staff that resulted in his final decision. At 6’1″, and 280-pounds, his commitment seems like a perfect match for the Panthers, who have chosen to recruit true football players at defensive tackle (see Dontae Wilson Commit story in the 2017 class), instead of players with just size.

So what type of player is Georgia State landing? For starters, they are getting a player who is fundamentally sound with strong lower body strength. He uses his hands excellently, which allows him to get leverage easily on his opponent. Choloh’s most attractive skill is his lateral quickness, which in tandem with his unparalleled hustle produces plenty of tackles across the line of scrimmage. His Archer squad plays in one of the toughest regions in Georgia, and Choloh more than holds his own against offensive linemen that are FBS recruits with over double digit offers.

Choloh is now the 5th commit for Georgia State in the class of 2018, and the 2nd player from Georgia, joining fellow Gwinnett Co. student-athlete Brandon Joseph.