Ola rising senior Bryce Lawrence was ready for the recruiting process to end, and yesterday he decided to commit to Mercer. The 6’3″ QB is a steady pocket passer and chose the Bears over offers from Western Illinois, Eastern Kentucky and Florida Atlantic.

Mercer offered Lawrence on May 9, which was at the height of the evaluation period. That same day, he was offered by Florida Atlantic, and then the very next, Western Illinois decided to jump in and offer. Ultimately the local college was the most appealing for Lawrence, especially after a visit during this summer break when he got to bond with the coaching staff. 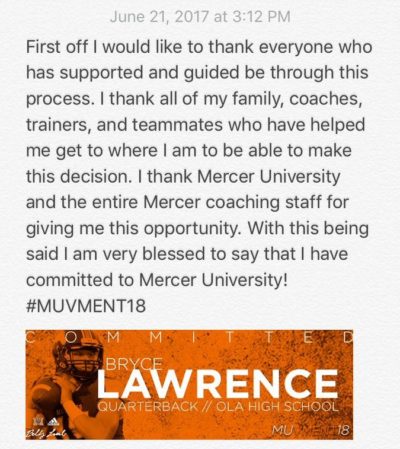 So what type of player is Mercer getting in Lawrence? First, they are getting a big QB with an athletic frame at 6’3″, 202 pounds. He has worked in the weight room this offseason and has his power clean near 300, which ranks him near the top in the state for his position. He throws a consistent ball from 30-40 yards out and does a great job making smart decisions minimizing turnovers for his squad.

Off the field, Lawrence is an excellent student sporting a 4.0 GPA. This upcoming season, we expect the Ola Mustangs to make a push into the playoffs with a strong senior squad led by Lawrence. He is the first commitment in Mercer’s 2018 class and the first Peach State QB to commit to an FCS school.