North Paudling linebacker Tyler Bird promptly ended his recruitment Monday afternoon when he committed to Appalachian State. This is a major commitment for App State, which had to beat several other FBS programs for the explosive linebacker.

The first team All-Paulding County linebacker saw his recruitment truly take off around the middle of February when he was offered by Georgia State, Colorado State, UAB and App State in just a couple of days. That seemed to put him on the recruiting map, and at the time of his commitment, he was holding around 20 offers. 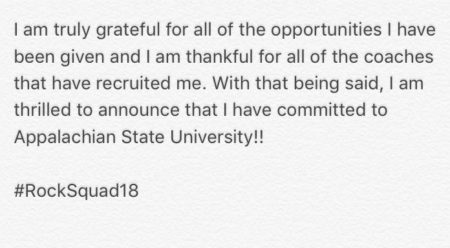 The excellent student-athlete was diligent in the decision-making process, visiting most of the schools that offered him, but the staff at App State, specifically their defensive coordinator and linebackers coach, made a big enough impact to stand out from the rest.

App State is landing a very talented linebacker in the commitment of Tyler Bird. He has excellent instincts reading the play and increased his weight by 20 pounds in the last year, making himself a lot more explosive. He has a big motor too, but where he truly shines is his ability in pass coverage. The 2018 linebacker gets out to his assignment fast, reads the QB’s eyes and has possibly the best set of hands out of any linebacker in the state of Georgia.

He is a hard worker on the field and in the classroom, where he sports a 3.9 GPA and scored 1390 on the SAT. This upcoming season he has shifted over to inside linebacker, so we expect his production to increase even more. His North Paulding squad is a dangerous team and has a lot of solid FBS athletes, so we expect them to compete for a playoff spot in their region.

Bird is the eighth commit for Appalachian State in the 2018 recruiting cycle. He joins safety Kaleb Dawson from Colquitt County as their second commit from the state of Georgia.