Taking over the reigns of a Gwinnett County football program in its teething years two years ago, some people must have thought Coach Nick Bach to be out of his mind. Prior to his arrival the program had gone (13-37) with no playoff appearances in the first five years of existence. To make matters worse Lawrenceville (Ga.) Mountain View made the move to Region 6-AAAAAAA in 2016 with the likes of Mill Creek, North Gwinnett and Peachtree Ridge.

In his first season the Bears went (3-7/2-5), but low and behold last season they finished (8-3/4-2) making the playoffs. One of the reasons for their success has been the development of two-way standout Blake Carroll. Carroll ended the season as the team’s second leading tackler with 75 stops. He also carried the ball 51 times for 398 yards and three scores. 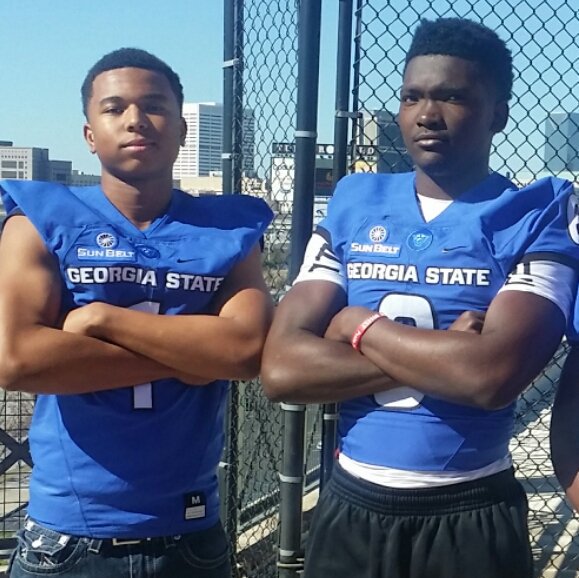 “He continues to get bigger, faster and more flexible every year,” Bach said. “This year he will probably be an in-the-box backer, but make no mistake he is a smooth runner that can make people miss or run them flat over. I could easily give him 25 carries a game, but we need his intensity on defense.”

His production and ability to run through ball carriers has already led to offers from Arkansas State, Eastern Kentucky, Eastern Michigan, Georgia State, Troy and Western Michigan. In addition Carroll is receiving heavy interest from Georgia Tech, Miami of Ohio, Minnesota and Tulane.

“Right now I would say both Georgia State and Western Michigan are recruiting me the hardest,” Carroll said. “Coach Chris Collins and Coach David Duggan are doing an awesome job staying in touch and texting me on a regular basis.”

Carroll has already been on several unofficial visits this spring stopping by Eastern Kentucky, Georgia, Georgia Southern, Georgia State and South Carolina. He has another busy week in store with planned visits to Georgia Tech for their Spring Game and Tulane on Saturday.

“I’m originally from the Wilmington, North Carolina area and I would love to hear from the Tar Heels, they were one of my favorites growing up along with Florida,” Carroll said.

This spring he has already taken part in the Nike Regional Opening in Atlanta and hopes to somehow squeeze in the Rivals.com Three Stripe camp this coming Sunday. As far as college camps go, expect Carroll to make an appearance at a Kirby Smart one-day camp in Athens.

“He is a guy that should have 20 to 25 offers before it is all said and done,” Bach said. “He is a Power Five talent, because his versatility as an athlete is off the charts. I can definitely see him being a special player at the next level; he is just so competitive – always going 100-MPH. Blake has really worked on his speed and is competing in the 110 and 300-meter hurdles this spring.”

It doesn’t hurt his visibility to college coaches to know that he sports a 2.8 GPA with a 1080 on the first take of the SAT. Carroll takes all honors classes and hopes to eventually score higher than a 1,200 on the test.

“We have a lot of starters coming back next year with athletes everywhere,” Carroll said. “We lose three players on offense and only four on defense, so leadership should not be a problem. I expect to play several positions, wherever coach needs me to win football games.”

For college coaches hoping to get a glimpse of this versatile striker, Mountain View hosts their Spring Game May, 20 at 11am versus Hiram. Expect to see bodies fly backwards as Carroll bears down on his unsuspecting prey.