Arkansas State became the first school to offer angular wide receiver Dash Hairston tonight. The 6’3″, 180-pound receiver talked to Recruit Georgia about what it feels to land his first offer.

“It feels great to receive my first offer,” Hariston emphatically said. “It’s so fulfilling. All of the dedication and hard work that I’ve put into football over the years is starting to pay off. I’m thankful to Arkansas State for recognizing that.” 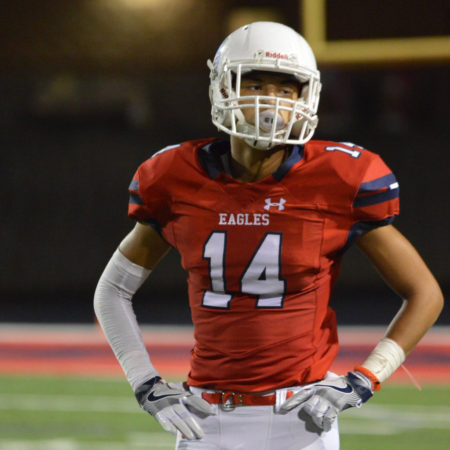 Hairston had a strong junior season last year catching 22 receptions for 446 yards and 5 TD’s for his run-heavy Milton squad. He has a long running stride and seemed to improve every week last season – playing his better games late in the year.

The word is just getting out on Hairston and the Red Wolves coaching staff just reached out today. “The Arkansas State coaches have been following me on twitter for a while, but the first time I heard from them was today via Twitter messenger.”

Hairston gave a quick insight into his spring so far, “I’ve recently visited Vanderbilt, Navy, Georgia and UNC with plans to go to Columbia, Eastern Kentucky and Penn this month.”

Today was only the 2nd day of the evaluation period, but obviously Arkansas State had been tracking the vertical threat at WR for some time. Expect colleges to get on the Milton campus in the coming weeks, and with more offers potentially on their way, be sure to keep track of @RecruitGeorgia on Twitter to hear the latest on the Milton speedy receiver.