Jalen Wilcox is a rising senior from Valdosta High School looking to make a name for himself in the fast-paced world of college football recruiting. The 6’3″ 280-pound athlete cracked the offensive line rotation last year for his state champion high school squad, and heading into his senior season we expect him to make a splash.

Wilcox spoke to Recruit Georgia a few days ago about a number of topics, including last year’s state championship run. “My junior year was good for me. Individually, it could’ve been better, but as a team, it was great, and I couldn’t have asked for a better way for my junior season to end.” 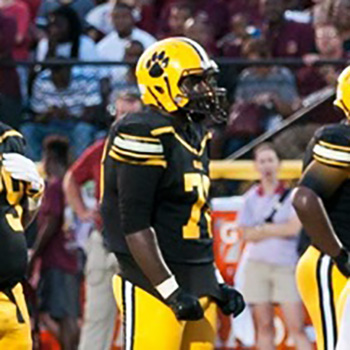 This offseason Wilcox and his teammates are determined to build off last year’s success. Several seniors on the offensive line will be graduating this May, and with the opportunity to play heavy minutes this upcoming year, Wilcox is focused on fine tuning his skills. “I need to improve on staying low on the football field while blocking other defenders,” he said.

The Valdosta offensive lineman plays with a lot of intensity, and believes his athleticism can help a college at the next level. “My biggest strength is being able to move well for my size and have split-second thinking if an outside linebacker walks up to the line. I’m able to think quickly and make the correct block in our scheme.”

The big man made the most of his opportunities last season. Against Lee County, he made a bone-crunching block that dismantled a player who will suit up for LSU next fall. That explosive play gave him the overwhelming vote earlier this week for the top block on National Pancake Day, which was decided by our Twitter community.

Wilcox, who models his game after Trai Turner from the Carolina Panthers, plans to take an upcoming visit to Lane College, as well as attend a few camps this summer. “I’m going to attend the Florida Gators football camp, Valdosta State, Mercer, and I’m going to a Junior Day Camp at Princeton,” Wilcox said.

With his senior year less than half a year away, Wilcox already has one big personal goal he would like to achieve. “My biggest goal for my senior year is getting as many scholarship offers as I possibly can.”

Earning that first offer will be a practice of patience for both Wilcox, and the college coaches, who will surely wait to see his early senior film. A potential deciding factor in his recruitment will be how he starts off his senior year. College coaches will be looking for him to make an initial impact on his team, while showcasing explosive film where he dominates the high school competition at the point of attack.

These next few months he needs to live in the weight room, and set achievable goals, so that he can get quicker, faster, and stronger than his man; thus allowing him to win the battle at the line of scrimmage, and the opinion of college coaches. Interested in recruiting Jalen Wilcox? Click HERE to see his Hudl page.