National signing day was about 3 weeks ago, but the 2018 recruiting cycle continues, and just this weekend Walton’s senior Chandler Smith announced his commitment to Samford. The sure-handed wide receiver pledged his official commitment on Twitter saying, “Thankful to say I’m committed to further my academic and athletic career at Samford University!”

Smith, who is the epitome of the student-athlete with a 32 ACT score and perfect 4.0 GPA, is a great pick-up for Samford. The senior is a deceptively fast athlete, and hits his top speed in just a few strides. He looks really comfortable running routes out of the slot, and does a great job of utilizing blockers downfield. Smith runs tight routes, and just seems to have knack at finding a massive hole in the zone defense after the play has broken down, making him a great safety valve for the quarterback.

Walton’s head football coach Daniel Brunner echoed a lot of the same sentiments. “Chandler is an elite student, teammate, player, person, worker and competitor. He is the total package! He is going to do big things at Samford.” 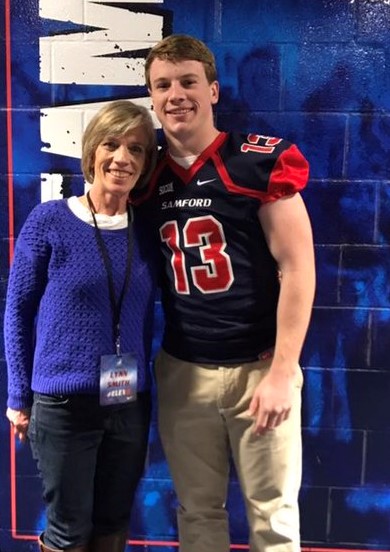 During last fall, Smith had one of the best catches in the entire state of Georgia earning national media attention on USA Today, and winning the Top Play on our website for that weekend. The senior showcased his elite hands off an errant pass that bounced off a defender’s hands, and as the defender fell to the ground the ball was knocked back up, which suspended the pigskin about a foot off the ground. That’s when the senior Walton receiver snatched the ball, and ran down the sideline for a score.

Playing at Walton, Smith was on arguable one of the top 5 teams in the entire state regardless of classification, and over the last year he has been a key member of one of the most efficient passing attacks in the southeast. Just last summer the Walton 7v7 team dominated one tournament after another and was a finalist at a national competition in Hoover, Alabama. We have seen Smith now live a few times, and his route running is as advertised, and he can shake top-quality defensive backs out of their shoes in 1v1 situations.

Recruiting coach Monty Bumper believes Smith’s mindset will prepare him for success at the next level. “Chandler Smith is the ULTIMATE TEAMMATE AND LEADER. He challenges himself on the field and off the field to be the best. “Winner” is the one word that describes him.”

Samford recruiting coordinator Ross Newton did his homework evaluating the senior’s film, and he has certainly found himself a reliable player, who can jump right in and make an impact on special teams, especially in onside kick situations. The Samford staff hosted the senior on a visit back on February 2nd, and after a few weeks reviewing his options, Smith was ready to make his commitment. The Walton senior chose Samford over an offer from Presbyterian and a preferred walkon opportunity from App State.

The Bulldogs had a strong class in Georgia for the class of 2018 and adding a player like Smith only strengthens a quality group of Georgia talent. The Walton senior is just another example that the recruiting timetable plays out differently for each student-athlete, and a large dose of patience should be issued for every recruit at the start, middle and even the end. Luckily for Smith, he has an infectious work ethic which carried him a long way during the recruiting process, and we expect that same competitive spirit to be extremely useful for his time at Samford.