The state of Georgia is loaded with senior talent once again, and perhaps no other name has meteorically emerged like Ridgeland High School’s do-it-all athlete Grayson Moore.

The 2017 student-athlete is Week 8’s Top Play winner after he made an amazing punt return that had multiple stiff arms and possibly several broken egos from the opposing team. Moore capped off the game with 263 yards of total offense and two touchdowns.

He has been on an offensive tear this season so far, totaling 554 yards rushing on 35 carries and eight scores, while also making five catches for 118 yards and two TDs. The explosive playmaker has seemingly come out of nowhere, so we spoke with Ridgeland assistant coach Micah Hughes to get the scoop on the underrated senior prospect. 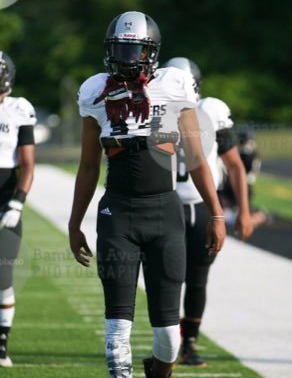 “Grayson was huge for us last year defensively and was a big play threat at receiver in certain situations especially on the goal line. We knew going into this season he was one of our best athletes and we would have to get him more touches offensively. He’s had such a huge impact on our offense as a running back and a wide receiver.”

Currently, Moore is averaging 15.8 yards per carry on the season. At 6’4″, Moore uses his lanky frame and elite speed to pick up chunks of yardage. He is an effortless runner, blowing by defenders like they were running in sand.

Coach Hughes shares the same thoughts on Moore’s ability and believes his versatility out there on the field is special.

“The young man can play anything. Some weeks he’ll play running back and linebacker, the next he’ll be a receiver and safety. He was a defensive end for us last year and was absolutely phenomenal there as well. Coaches come in and ask where we see him at the next level and I always tell them anywhere you need him. The kid can play anything. Grayson is also a phenomenal basketball player.”

The 2016 season has been a very exciting year in Georgia thus far, and one of the real surprise programs in the state has been Ridgeland. Recruit Georgia was the only media outlet to rank the Panthers preseason, and deservedly so, as they are undefeated and a consensus top-10 program.

Players like Moore have made a monstrous impact for Ridgeland, so we were curious to hear what Coach Hughes thought Moore’s biggest strengths are on the field.

“Grayson’s size I feel is his biggest strength. He’s 6’4 and a little over 200 pounds. His wing span is ridiculous; he can go up in traffic and make big catches or he can chase people down from the backside. Also, he has a nasty stiff arm. He’s a 4.5 forty kid but his size has really set him apart from the pack which I think will be a big advantage for him at the next level. He has the body type to be able to just pour weight on.”

Colleges have been relatively quiet around the senior prospect, but that should change if he continues to build off his impressive start to the season. No visits are planned as of right now, but colleges from every level of competition have been in contact.

“The big time programs have just now started coming into the fold. We’ve been getting texts left and right after the Northwest (Whitfield) game. He’s really been picking up interest from all levels. Right now Austin Peay, Lindsey Wilson, Southern Illinois, Kennesaw State and a number of other schools have texted with interest,” Hughes said.

It is only a matter of time before more colleges from FBS and FCS programs begin to contact Moore. He has the speed and size to become an FBS wide receiver but is still very inexperienced on the offensive side of the ball. Our staff really likes his upside, and as Hughes mentioned earlier, he could pack on weight and become a dominating wide receiver at the next level.

We have attached Moore’s highlight reel at the top of this page. Click HERE to visit his HUDL profile, and be sure to give our Facebook page a LIKE to read more articles like this in the future.