Nestled in the pines of Gainesville, Georgia, is Chestatee High School, home of junior running back Nick Lyles. The 2018 student-athlete has caught our eye and is currently fourth in the state in rushing yards with 1,075 yards and 16 total scores. 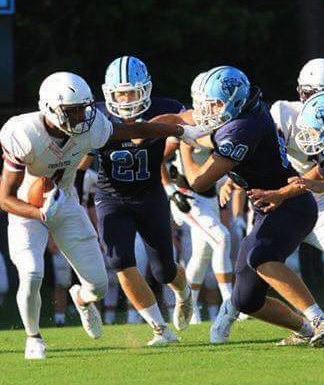 Above, we have shared a video in which Lyles has an impressive performance against an athletic West Hall defense. The junior back grinded out 153 yards on 26 carries and scored two touchdowns, but his team fell short with a 35-28 outcome. Regardless of score, it was obvious that the 6’1″, 200-pound running back has the intangibles necessary to be an impact back for a major college football program.

What separates Lyles from other running backs in his class? For one, he has good running vision, which allows him to set up his blocks and spring long runs. When he sees an opening, the powerful running back hits the hole like a runaway freight train, smashing through any weak tackle attempts from the defensive secondary.

Lyles is a workhorse at running back and does an excellent job of fighting for extra yards. Time and again we saw the power back churn his feet and stretch out another 3-5 yards, while literally carrying defenders on his back in the process.

The Chestatee star back is averaging 7.6 yards per carry and 134 yards per game currently. His strength of schedule will not be confused with one featuring lots of FBS talent, but the junior back has the skills to play at that level. He is already 200 pounds, and with his current frame, he could easily gain another 20-30 pounds and be a powerful bruising back at the next level.

Lyles has yet to make an official highlight reel for his junior year, so we have linked other games that were impressive down below. One other quick note: Lyles also plays defense and showcases great potential there as well. You will notice more on defense in his sophomore film.