Class of 2019 prospect Raykwon Anderson was offered by and committed to the University of Florida yesterday. Charlton Sports Net’s Facebook feed first reported his commitment to the Gators yesterday evening. 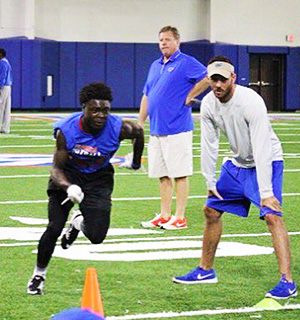 Anderson, who just received his first college scholarship offer from Maryland a few days ago, camped at Florida and impressed the coaches so much that they had to offer the dynamic offensive weapon. Anderson let Recruit Georgia know that Florida was his dream school and that he has always wanted to play there.

The Charlton County star had an outstanding first season of football last fall and this upcoming fall looks to be even more promising. Anderson has packed on more weight from last fall, which will make it even harder to take down the elusive playmaker. Region opponents for this upcoming season better invest in a good detergent because their uniforms will be grass-stained from all the whiffed tackle attempts on Anderson.

The rising sophomore is the earliest commit of anyone from his class in the state of Georgia to our knowledge. The Gators are getting a player with elite speed, balance and ball skills. He will be an exciting offensive weapon to watch at the college level, especially in the return game where he excels, but first the Folkston community will get to enjoy his talents for another three seasons.