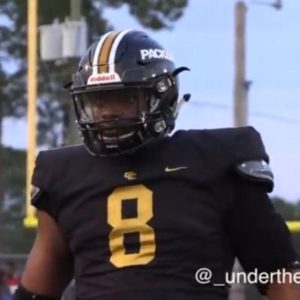 Very good defensive linemen who is fast and physical at the point of attack – Brockington has been a starter on varsity since his sophomore year. His twin brother is the receiver on the team, but unlike his brother, he has put on some weight over the last year. To be exact, nearly 40 lbs, which makes him sort of a tweener at this point. Will he be a DT or DE in college, probably the best fit is in a 3-4. Brockington explodes out his stance and quickly gets into the backfield. Watching him now several Corky Kell Classics the last few years, and his reactions off the line is some of the best I have seen in live game action.