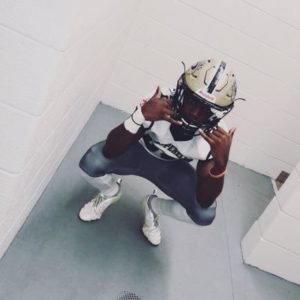 Robinson is one of North Georgia’s fastest player, and in pads has been clocked at 20 MPH. Against his region competition, that’s really not fair, and just a simple screen pass to the sideline can be a gamebreaker to the defense. There is little doubt that the slot receiver can run, it’s over and again on film where he just blows by defenders with better angles on him. the better question some will ask is where will that speed be utilized best. Most of his offensive plays are purely on screen passes, he doesn’t run many different routes at all but still shows good explosion out his release. Robinson has a natural running stride to him with good forward lean too. He needs more work with his footwork in pass coverage and he doesn’t flip his hips quick enough so there is potential to get burned, at least right now. Robinson has a ton of upside for sure, but is definitely a raw recruit at this point. Would be a good option slot back though, that would probably be his quickest path to playing time. It seems like his highest ceiling will be at CB at the next level, and will most likely need a RS to fully adapt.