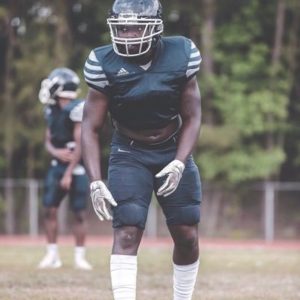 Rivers has been a 2020 recruit that we have watched since his freshman year. He is a professional football recruit, meaning, he will do whatever it takes to get the best opportunities to play football in college. Going to Cedar Grove will now make his 3rd HS in the last 4 years. Rivers best game last fall came against 6-A power Allatoona where he lined up at MLB. Rivers was all over the place, showing his compact frame throw blockers off balance and make nice hustle plays. Rivers doesn’t relent. He makes a read and books it to the back. Rivers takes very good pursuit angles for a smaller player. He does a nice job of slipping by blocks with how low he can get and his above average lateral quickness. Rivers is just a hard worker. His body carries weight easily, and for a good bit of HS, he has been trying to hold it off to play SS/NB. I think it’s official though that Rivers will have to play WILL at the next level. Watching his spring film, and Rivers is in a much more natural position at WILL. His toughness and ability to change direction is even more effective where he can slip into the backfield and have more room to operate, plus doesn’t have to look over the top of the LOS. I love his energy, Rivers will hustle down field when a lot of players would have given up. Perfect special teams player early on, Rivers will do whatever it takes to help his team. Very low ego player too. Never complains about not playing, and to be honest, some of his transfers has probably hurt his recruitment. He looked good in the spring game, and just earned his first FCS offer this summer from UT-Martin.