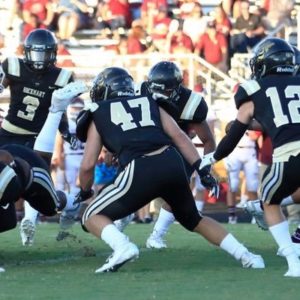 Couch played on a run heavy team last year, but still was able to find the football for nearly 20 catches and 388 yards. He’s very good at selling his block and then slipping out to run his route. That’s a byproduct of his run-heavy offense, but also says something about his physicality as a blocker. Couch is deceptive and you can tell his attention to detail gives him an advantage to any defender who is ill-prepared. Couch uses his hands well as a blocker, gets very good leverage, and being in such a run-heavy system you know that Couch will take pride in getting his man down. Definitely an athlete to get out to your camp, the 2020 recruit has gained some weight this offseason, so I’m sure he will catch some college scouts eye during the camp circuit.