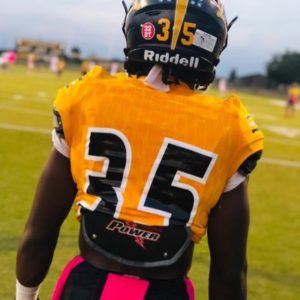 I am hard working and dedicated 100%. Also a team player but always ready to be the go-to man. As a player I am fast, physical and a student of the game.

The slotback was a pretty big playmaker last year, and of course made the notable play in the championship game where he maybe was or was not out of bounds for the potential touchdown his sophomore year. Watching his junior film and it’s clear that Noah is a quick accelerator, and can really be utilized as a weapon at slot receiver. He shows really good hands, makes nice cuts into his routes. Very well trained at squaring up quickly, and even coming back to the football. He could really take his game to another level this year, and end up being one of the more explosive players in 2020. Whittington is the type of player that excel in a spread offense, he can both run the football and also slip out as a receiver. Peach used his shiftiness a lot in isolate situations where he can square up on a single defender, so he did a ton out on the perimeter, but with the added weight going into the 2019 season, I’m thinking Whittington is going to be making more runs up the middle.