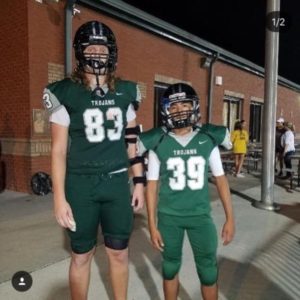 I consider myself to be a young man of good character, with ambitious purposes, having a high sense of honor and a deep sense of personal responsibility. I, along with one other person on the 70 man varsity roster, was selected by my head coach to attend the FCA leadership conference this past year. In addition, I was awarded the State Farm Player of the Week Award for my performance against Dawson County High School. I was highlighted by my head coach as a sophomore in the local newspaper as someone who will add a positive impact on the offensive and defensive side of the ball. As a sophomore I started both ways as a Tight End and Defensive End to include long snapping and being on kick off and kick off return. While in middle school I was the only 7th grader who was asked to play up on the 8th grade team and started both ways. I am a two sport varsity athlete having lettered in basketball as well. My morals, values, work ethic, passion for the game of football, and passion to succeed in life, and lastly my size is why I stand out as a future collegiate athlete.

Nixon is a solid looking TE prospect who got some really good reps last season both on the offense and defense. From watching him early on his sophomore year, Nixon plays the game with a lot of physicality, and his blocking has something that has always stood out on film. He’s tough at the point of attack at DE. As a receiver he does a nice job sticking with his route and makes himself an open target within the zone defense. As mentioned, Nixon’s blocking is probably his best asset. There is no doubt, he can grow more over the next few years, and really become a player who can dominated the edge on either side of the football, but think with his length and ball skill he is a good fit at TE. Getting more leverage and having better hand placement with his blocking would make a difference going forward, right now he relies on his size difference to knock defenders off balance. Needs to get stronger in the hips this summer, that will really help with his general explosiveness.