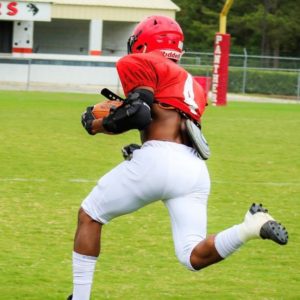 Walker was a nice playmaker last year on Clinch’s state title squad playing both slot back and free safety. He’s a good athlete no doubt, but definitely a smaller frame. Still, he makes some really nice deflections, and shows some real ability as a cornerback at the next level. He is pretty quick, and his reactions are really good – he reads the play quickly, and going into senior year he is playing FS. I like how he goes into a tackle, he gets real low and wraps up his opponent efficiently. He takes some talented players down pretty quick actually, and does so efficiently, so obviously a very strong football player with good core strength. Walker is a nice 2020 recruit who could play NB at the next level with good efficiency and deserves D1 looks. Senior year he had a big impact on offense and defense, but think his long term potential is at CB where he quick-twitch change of direction is a nice fit to go along with his physicality when making a tackle.